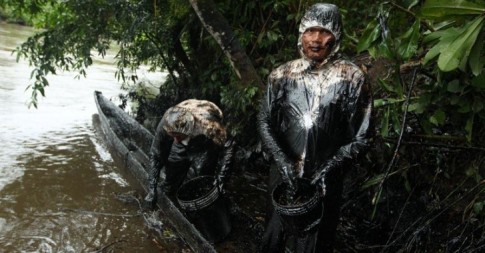 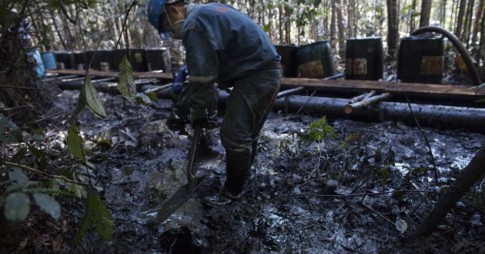 “This oil spill has already resulted in severe and irreparable harm to the community lands of Mayuriaga and to our collective territory as a people.” (Photo: Reuters/Antonio Escalante )

After learning that they would be excluded from an official state of emergency declared in the wake of two catastrophic oil spills in the Peruvian Amazon, members of the Wampis community of Mayuriaga stopped a helicopter from taking off late Sunday evening and held 8 officials hostage to force the government to respond to their desperate pleas for help.

More than a month after the spills devastated many Indigenous communities’ water supplies, there is little end in sight to the suffering of those most affected.

“Though officials refer to the second leak as ‘the Mayuriaga spill’ because it took place in Mayuriaga,” Reuters reported, “the government did not include the community in an official list of affected groups that would receive emergency supplies and attention.”

“This oil spill has already resulted in severe and irreparable harm to the community lands of Mayuriaga and to our collective territory as a people. Responsibility lies squarely with [the oil company] Petroperu, who have acted with complete negligence,” Wrays Perez Ramirez, who was elected president of the Wampis after they formed a government last November, told RT. “Over more than 40 years they have failed to maintain and repair their pipeline knowing full well that it needs constant maintenance and replacement every 10-15 years.”

The grounded helicopter belonged to the Peruvian military, and it was transporting government and Petroperu officials to the region to inspect the damage from the spills.

The government will amend the emergency decree, published last month, to include Mayuriaga, said Deputy Culture Minister Patricia Balbuena.Balbuena said a local government compiled the list and it was not clear why it excluded Mayuriaga.

“It’s a mistake that should be corrected as soon as possible,” Balbuena said.

It remains unclear whether officials have spoken with the tribe directly. “The Peruvian Air Force said in a statement that a group of officials would visit the area Monday, including the president of PetroPeru in order to hear the protesters demands,” teleSUR reported. “The statement added that the crew were being treated well and that the helicopter had not been damaged.”

As of Tuesday, there have been no further reports regarding what meetings took place.

The state-owned oil company Petroperu was responsible for the pipeline breakages that led to the horrific spills that poured 3,000 barrels of oil into Amazon tributaries, causing “incalculable damage” to one of the most biodiverse areas of the tropical forest, according to Scientific American.

“The people affected [by the spills] are suffering from nausea, vomiting, dizziness, and diarrhea,” teleSUR reported.

The Peruvian environmental regulator has stated that the recent spills were “not isolated incidents,” RT reported, and that the oil company had failed to respond to 20 smaller spills from its pipelines in the Amazon since the regulatory body was formed in 2011.

One of the Petroperu officials taken hostage told the Peruvian news outlet RPP while he was being detained that the native community was respectful and peaceful. He noted that the Mayuriaga community is simply attempting to ensure a meeting with government officials so that the tribe is finally provided the assistance it feels it is owed.

Despite the peaceful nature of the group’s action, local non-profit news agency Servindi warned that Peruvian activists and humanitarian organizations fear “that the measures taken by the community may lead to a repressive action by security forces.”