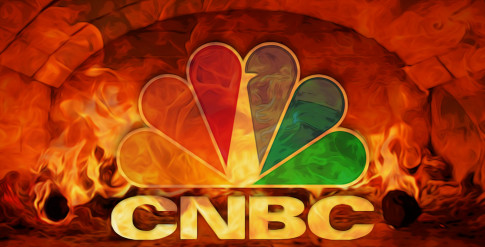 One of the core aspects of mainstream financial media in general, and outlets like CNBC in particular, more so even than their chronic permabullish bias, is the seemingly endless gallery of “experts”, “pundits”, and other talking heads whose only requirement is wearing a business suit (in some very notable exemptions) who show up on TV, offer trade advice and recommendations – while either pitching their own trading services or hoping to offload their own existing positions  – and if (or rather when) said advice leads to material losses are not heard from again until a certain period of time passes, and those who suffered listening to said “experts” have moved on, at which point the farce repeats itself.

The legendary example of this is none than Jim Cramer declaring loudly that “Bear Stearns is fine, don’t be silly” when asked by a viewer in early March 2008 if they should pull their money out of the bank. The stock was trading at $63; six days later JPM “bought” Bear for $2/share to prevent it from liquidating.

Why is Cramer still on the air? Because he was never held accountable to any standard of fiduciary responsibility. In short: he acted as an entertainer. 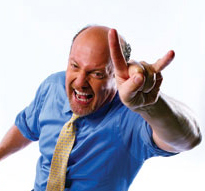 Furthermore, some have speculated that all financial media outlets like CNBC are ultimately nothing but an infomercial sounding board for bullish pundits to pitch their ideas (while at the same time doing the opposite of what they recommend as David Tepper and Jeff Gundlach recently demonstrated), or sell their services while giving outlets like CNBC 5 minutes content slots (for which CNBC pays a few hundred dollars per appearance) which in turn may explain CNBC’s collapsing ratings which as we reported a year ago, stopped using Nielsen out of embarrassment.

This all may be coming to an end thanks to the recently issued “fiduciary rule.”

Courtesy of Forbes, here is some background on what this rule is:

In April, the Department of Labor issued a fiduciary rule proposing that a “best interest standard” be applied across a broader range of investing advice such that any advisor getting paid to provide personalized investment advice — on things like what assets to buy or whether or not to roll a 401k into an IRA — be considered a fiduciary and have to put their clients’ interests first. Currently, brokers and advisors must only comply with a “suitability standard,” which means that they must make recommendations that are suitable to an individual’s investment needs, but they can also consider their own and their firms’ interests.

In the months since the DOL put forth this fiduciary rule, Republicans and financial firms have excoriated the proposal as being bad for America and placing an undue burden on firms’ business. It turns out that putting your clients’ interests ahead of your own is practically impossible, and here is, according to Wall Street, why:

“It will be very difficult, if not impossible, for financial professionals and firms to comply with the requirements,” Jackson National Life Insurance president James Sopha wrote in a letter to the DOL in July. In an 83-page letter sent to the DOL the same day, Lincoln CEO Dennis Glass called the fiduciary proposal “immensely burdensome” and “extremely intrusive,” while also noting that “it would be a mistake to assume that fee-based compensation models are always better for retirement savers than commission-based models.”

This surreal defense of frontrunning and abusing one’s clients went on: Kent Callahan, the president and CEO of Transamerica’s investment and retirement division, told the DOL that “the re-proposal would substantially change our ability to provide the range of retirement services and products from which investors can choose to meet their own specific needs.” And Susan Blount, executive vice president at Prudential, noted that the proposed fiduciary requirements posed a “significant challenge” that could lead to “increased compliance costs” and will “significantly” increase firms’ servicing expenses.

One person who recently called out advisors hypocrisy quite vocally, was Elizabeth Warren, who in a letter sent to the Department of Labor and the Office of Management and Budget called the firms’ claims baloney. Why? Because, in her view, each company made completely contrasting comments about the fiduciary rule in public comments to their investors.

“Publicly traded companies are rarely held accountable for assertions they make when lobbying in Washington, even if these assertions are untrue,” Warren writes. “But when communicating with investors, publicly traded companies are required by law to provide full and accurate information about any material matters that may affect their business models or stock valuations.”

This wasn’t Warren’s first attempt at supporting the DOL’s proposal for less conflict-laden investment advice. In an October report titled “Villas, Castles, and Vacations: How Perks and Giveaways Create Conflicts of Interest in the Annuity Industry,” Warren blasted firms for giving kickbacks and Caribbean vacations to agents who sell annuities to consumers.

Meanwhile, as the government’s intention to pursue the “fiduciary rule” is only picking up steam and supporters, the financial pundits who have finally read the small print are starting to panic because they realize that if the pending regulation passes, they may be locked out of the financial infomercial circuit for good.

Case in point, popular financial radio show host Dave Ramsey, who as Forbes writes, “caused a firestorm on Twitter last week when he weighed in against the “fiduciary rule.” Ramsey Tweeted, “this Obama rule will kill the Middle Class and below ability to access personal advice” – actually it will merely kill the ability of a vast majority of charlatans to pretend they can forecast the financial future. A war of Tweets then broke out between opponents of the rule, and supporters, the latter of which includes fee-based investment advisers expected to benefit from the new costs the rule will shower on their broker competitors.

Fittingly, even before Ramsey came out against the rule, one of his critics called for using the rule against Ramsey, supposedly for providing advice said critic deemed harmful to savers. In an October article in LifeHealthPro, an online trade journal for insurance agents and financial advisers, Michael Markey, an insurance agent and owner of Legacy Financial Network, called for Ramsey to “be regulated and to be held accountable” by the government for the opinions he gives to listeners. Markey hailed the Labor Department rule as ushering a new era in which “entertainers like Dave Ramsey can no longer evade the pursuit of regulatory oversight.”

What a novel concept: holding financial “advisors” accountable for their advice. No wonder the industry is panicking. And ironically, nobody should be more panicked than CNBC and its head entertainer, Jim Cramer. As Forbes John Berlau writes, “experts both for and against the rule I have talked to agree its broad reach could extend to financial media personalities who offer tips to individual audience members, a group that includes not just Ramsey but TV hosts like Suze Orman and Jim Cramer, as well as many other broadcasters who opine on business and investment matters. They would be ensnared by the rule’s broad redefinition of a vast swath of financial professionals as “fiduciaries” and its mandate that these “fiduciaries” only serve the “best interest” of IRA and 401(k) holders.”

The aftermath of the fiduciary rule is aleady facing a backlash among the financial advisory lobby and its lawyers among whom is Kent Mason, a partner at the law firm Davis & Harman, who said that  “under the proposed regulation, investment advice from a radio host to a caller regarding the caller’s own investment issues would appear to be fiduciary advice if the advice addresses specific investments,” Mason said in an email. It doesn’t matter that Ramsey and other hosts aren’t compensated by listeners, he adds, as the DOL rule explicitly covers those who give investment advice and receive compensation “from any source.” Mason agrees with Markey that the compensation Ramsey receives from radio stations that carry his show and from book sales are enough to define Ramsey as a “fiduciary” under the rule.

To be sure not every financial visionary would be immediately taken off the air: just those who get too specific: the rule containa an exemption for “recommendations made to the general public,” this wouldn’t protect Ramsey and other radio and television personalities if they gave specific answers to callers or audience members, argue both Mason and Markey. Similarly, Mason adds, while the main part of investment seminars would be exempt, “if during the seminar, someone from the audience asks a question about his or her situation and the speaker answers the question with respect to specific investments, that answer would be fiduciary advice.”

It would however, make the CNBC career of such entertainers as Jim Cramer virtually impossible, and would lead to a dramatic overhaul of the way financial outlets like CNBC, Fox Business and 24/7 Bloomberg Terminal infomercials as Bloomberg TV run their business.

Worst of all, though, it would mean that all those frontrunning mutual fund orderflow and fund managers will actually have to go back to doing research and trading instead of going on TV for many hours every day, in some cases as much as 5x a week on 4 different stations. And that is clearly unacceptable.

And while we are confident that the “fuduciary rule” will ultimately be watered down to lead to no real actionable changes, perhaps it will prompt some thinking among the general population who see their own personal advisor on CNBC every other day, and ask: “if my professional finance advisor is in such dire need of marketing that he spends most of his or her waking hours on TV, or writing columns, or tweeting, maybe I should get a different financial advisor.”