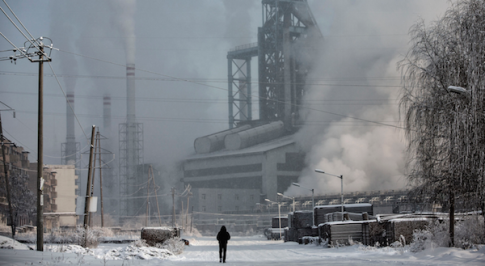 – Images From The Death Of China’s Rustbelt:

The frozen alluvial river plain that was once at the forefront of the Communist Party’s first attempt to build a modern economy, has now fallen behind, leaving a valley of brutal murder, protests, anger, suicide and regret.

This is the city of Tonghua in China’s rustbelt, where a desperate handful of steelworkers has gathered each week outside the management office of their mill in freezing temperatures to demand months of wages they say they’re owed. The answer, according to interviews with workers and residents, is always the same: there is no money.

This is the last vestige of protests that once drew thousands, and which, one fateful day nearly seven years ago, ended with a manager being beaten to death.

Typically overstaffed, inefficient and heavily indebted, they offer President Xi Jinping a stark warning of what the country could face if the millions of workers who depend on these lumbering corporations should get thrown out of work with nothing to fall back on.

The country’s leaders have vowed to reduce excess industrial capacity and labor in state enterprises even as they battle the slowest economic growth in a quarter of a century. China will eliminate up to 150 million metric tons of steel-making capacity in the next five years, the State Council said after a Jan. 22 meeting.

Eliminating that amount of steel capacity could lead to 400,000-500,000 job cuts and may fuel social instability, Li Xinchuang, head of the China Metallurgical Industry Planning and Research Institute, said in an Internet message.

There’s much, more more in the full Bloomberg article including the dramatic story of “Wang the Audacious” and Chen Guojun. Because they clearly put quite a bit of time into crafting the narrative, we’ll leave it to Bloomberg to recount the tale and simply note that more of what befell Chen is likely in the cards once China begins executing the “zombies” (so to speak) and laying off more workers.

We will close with one last excerpt just to leave you enticed:

Chen Guojun, a Jianlong executive, went to the coking plant to encourage people to return to work. It was a fatal miscalculation. Blocked by protesters, police and paramedics were unable to reach him in time, the people said. By the time they found Chen, he had been beaten to death.