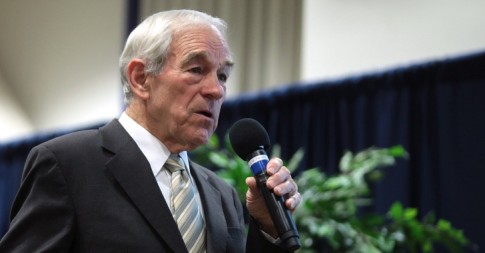 – Ron Paul: “Absolutely No Meaningful Difference Between Hillary and Trump”:

On Tuesday, Ron Paul agreed with what countless activists and independent journalists have been saying for months: Bernie Sanders is pretty much the same as Donald Trump.

Asked by CNN in an interview whether he would consider supporting Sanders’ presidential bid, Paul somewhat incredulously replied, “No. No, because he’s an authoritarian … he’s just a variant of Trump. Trump wants to be the boss.”

Paul went on, explaining that on issues of foreign policy where he’d collaborated with Sanders, the Vermont senator is “part of the military-industrial complex.”

“He was a big voter for militarism. He’s an authoritarian of a different color; but Trump is a super-authoritarian,” Paul said.

Paul’s criticism of the presidential contenders didn’t stop with Sanders and Trump.“From a libertarian viewpoint, there is absolutely no meaningful difference between Hillary and Trump,” he emphatically remarked. “I mean, they both support [the] military-industrial complex, the federal reserve, deficits, entitlements, invasion of our privacy.”

Indeed, Paul summarized the absurdity of the 2016 election platforms, saying, “It’s super-nationalistic populism versus socialism. That is so remote from what we need to be doing — we need to be moving ourselves away from tyranny toward liberty.”

Asked if he would be endorsing any candidates, Paul explained there isn’t a single person left in the race who fits libertarian ideals of limiting government and protecting individual liberties.

“Some of the top candidates want to carpet bomb the world,” he said, shaking his head in disbelief. “No, a libertarian can’t endorse this authoritarian approach.”