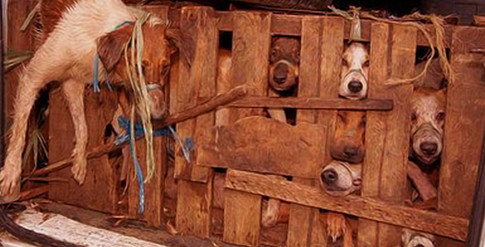 – How a Change to One Sentence Could Help Reduce the Suffering of Billions of Animals Worldwide:

Those of us disgusted by the confinement and routine abuse of farm animals are being given an opportunity to do something about it and push for a small change to a big policy that would reduce the suffering of billions of animals worldwide.

Whether stuffed into crates, crammed by the thousands into windowless sheds, or genetically manipulated to grow larger, the misery caused to animals by human beings is immeasurable. In an industry that aims to maximize output while keeping costs down, a small change in the wording of one sentence could force farms to operate more humanely.

International animal protection organisation Humane Society International (HSI) is active on almost every continent in working to protect the lives of all animals. HSI claims that a simple change to the sentence related to animal welfare in the World Bank Group’s safeguard policy — which sets global standards for sustainability and social responsibility — could have a lasting effect on global animal welfare standards.

The updated sentence would impact future lending policies for development banks, meaning that farms receiving public finances and support will be forced to operate more humanely. People are urged to take action immediately by signing the petition before the comment period ends on March 15th. Demanding the World Bank make their safeguarding policy language more explicit, the petition states:

“Please include meaningful animal welfare language in the Safeguard Policies — it could impact billions of farm animals.

I know that this will have a positive impact on the lives of many animals. However, I would like to encourage you make the language more explicit.

Please ensure the text within the Safeguard Policies explicitly mandates the standards within the Good Practice Note for Animal Welfare and the Five Freedoms for Farm Animal Welfare covering all farms, no matter the size.

This is a critical opportunity for the World Bank to mitigate the extreme confinement and other routine abuses suffered by billions of animals raised for food. Making this change will also help farmers and other food industry stakeholders meet the growing demand of people all around the world, like me, who want farm animal welfare protected and enhanced.”

Those wanting to support this push for a reduction in animal suffering can sign the petition here and visit the Humane Society International’s Facebook Page for more information.