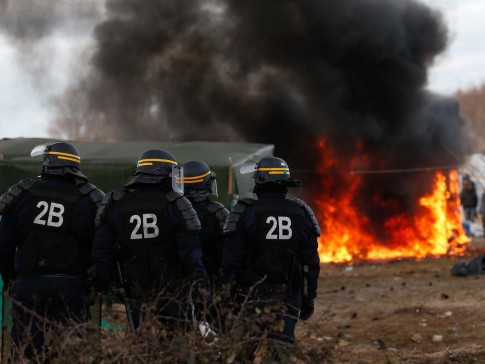 French riot police in front of a burning shelter at the start of the demolition of a part of the Jungle migrant camp in Calais, France, 29 February 2016

Riot units fired tear gas at crowds of asylum seekers who reportedly threw stones and other missiles, while others were seen attempting to stop lorries heading towards the Channel Tunnel and board before being forced back off the motorway.

There were no reports of serious injuries but at least three people, possibly pro-refugee activists, were arrested during the demolitions.

French authorities say around 1,000 people are affected by the eviction plan but humanitarian groups have put the total at more than triple that figure.

It is the largest in successive rounds of demolitions aiming to destroy squalid parts of the sprawling camp, near the entrance to the Channel Tunnel and ferries to England, and move refugees away from a motorway that has seen frequent disruption and clashes as groups attempt to board lorries.

Converted shipping containers complete with lights, heating and sanitation have been used to create new accommodation for 1,500 people in the camp, where conditions were previously described as “diabolical”.

But the much-touted facility has been greeted by suspicion and distrust. 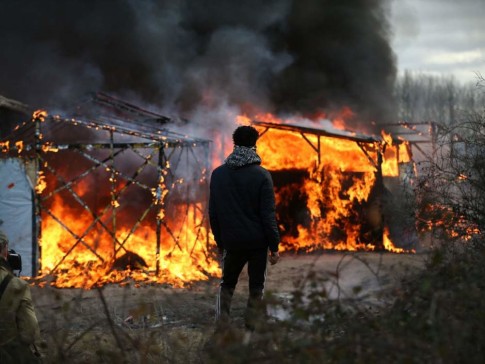 CALAIS, France — Makeshift huts went up in flames on Monday in an angry backlash as workers, guarded by scores of French police, began pulling down tents and shelters in the sprawling migrant camp in Calais.