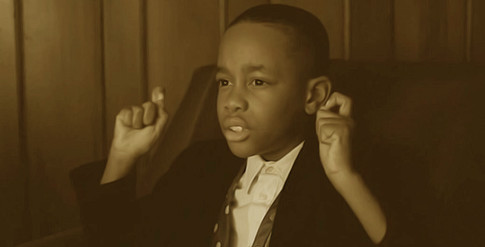 – Brilliant 10-Year-Old Explains How We Can End War:

At just 10 years old, King Nahh has his own YouTube channel, has spoken at various locations around the world, and appeared on various radio shows. In the interview below, Nahh showcases his knowledge about propaganda and violence in our culture.

“At 8 years of age, King Nahh has sat in with local civic leaders as they discussed addressing the issues that plague inner city communities, developed solution-oriented programs (such as Youth Television Film and Press at the H.U.B.B.), products (such as a music CD, a motivational DVD, t-shirts, etc.) and services (such as motivational & public speaking).”

Although he is just 10 years old, in the interview he was intelligent and articulate enough to explain that guns aren’t needed to solve problems but should still be allowed for personal protection. He also spoke of war and violence in our culture and the lack of necessity for things like armies.

He also discussed the occult concept of the pineal gland, of which most 10-year-olds are entirely unaware.

Although there has been little mainstream interest in the pineal gland in modern times, advanced civilizations of the past all recognized this gland as the “3rd eye.” The 3rd eye represented the source of consciousness to these cultures and linked the human body with the spirit world. Egyptian tombs were decorated with animals coming out of the center of the pharaoh’s head to depict the power of the 3rd eye, or pineal gland. Art all over Asia and ancient America also shows countless depictions of the 3rd eye and its connection to other realms.

Over the past 20 years, a doctor from the University of New Mexico, Rick Strassman, has been conducting experiments on a chemical called DMT, or dimethyltryptamine, which is produced naturally in the pineal gland. Strassman’s five-year study included test subjects from all backgrounds and gave new insight into the pineal gland and its role in the human body, as well as possible links between DMT and consciousness.

If King Nahh is any indication of what the next generation is looking like, then they may finally be the ones to change the world.

Editor’s note: All of the research about the pineal gland and Rick Strassman cited in this article is from his book, The Spirit Molecule.