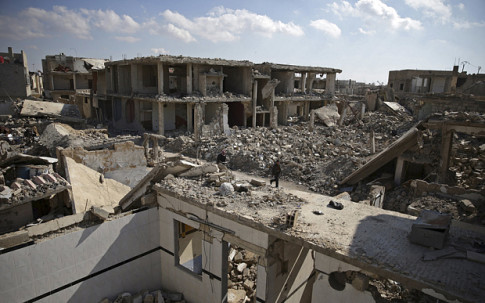 Russia warned of “a new world war” starting in Syria on Thursday after a dramatic day in which Gulf states threatened to send in ground forces.

Foreign and defence ministers of the leading international states backing different factions in the war-torn country met in separate meetings in Munich and Brussels following the collapse of the latest round of peace talks.

Both Russia and the United States demanded ceasefires in the long-running civil war so that the fight could be concentrated against Islamic State of Iraq and the Levant (Isil) – but each on their own, conflicting terms.

But the Gulf states, led by Saudi Arabia, staged their own intervention, saying they were committed to sending ground troops to the country. Their favoured rebel groups have been pulverised by Russian air raids and driven back on the ground by Iranian-supplied pro-regime troops.

They said their declared target was Isil. But the presence of troops from Gulf states which have funded the Syrian rebels would be taken as a hostile act by the Assad regime and its backers, and a sign that they were committed to staking their claim to a say in the final Syrian settlement.

Russia issued a stark warning of the potential consequences. “The Americans and our Arab partners must think well: do they want a permanent war?” its prime minister, Dmitry Medvedev, told Germany’s Handelsblatt newspaper in an interview due to be published on Friday but released on Thursday night.

“It would be impossible to win such a war quickly, especially in the Arab world, where everybody is fighting against everybody.

“All sides must be compelled to sit at the negotiating table instead of unleashing a new world war.”

Earlier in the day, both Russia and the United States had demanded a ceasefire in the Syrian war.

Russia did not specify a date publicly but diplomats said that they had suggested March 1, which the Americans say would leave them another two weeks to achieve their military goals, including the defeat of “moderate” rebel forces in the north around Aleppo.

The United States countered by demanding an immediate ceasefire.

The rebels, whose main negotiators have been touring Europe in the wake of the collapse of the Geneva peace talks and the renewed assault on Aleppo, say a ceasefire can only happen in conjunction with a negotiated “political transition” – something which looks ever more unlikely in light of regime victories on the ground.

Under the United Nations security council resolution passed in December, any ceasefire would automatically exclude Isil, the local al-Qaeda branch Jabhat al-Nusra, which operates throughout rebel territory, and other UN-designated terrorist groups.

Since these are being struck by both the United States and Russia, as well as the regime, the terms of the resolution mean that the only group that would have to stop fighting under the terms of a ceasefire would be the “moderate rebels” backed by the West.

This they are unlikely to do voluntarily.

Saudi Arabia is said to be furious that their main regional rival, Iran, has been allowed to consolidate its power bases in both Iraq and Syria because of the civil wars in both countries and under the cover of an international air campaign supposedly targeting Isil.

The kingdom, along with the United Arab Emirates and Bahrain, is offering to provide the troops the United States-led coalition are needed to take on Isil on the ground under coalition air cover.

‘This is a campaign that can’t be won by western troops doing the fighting. It can only be won in the end by local forces that have the support of the local population’
Michael Fallon

Michael Fallon, who held talks in Brussels on the fringes of a defence ministers meeting with deputy Crown Prince Mohammed bin Salman of Saudi Arabia, said he welcomed the Saudi offer.

“The Saudis are leading the Islamic military coalition,” he said.

“We’ve always made clear this is a campaign that can’t be won by western troops doing the fighting. It can only be won in the end by local forces that have the support of the local population.” That last phrase appears to refer to the undesirability in western minds of Isil being defeated from the air only for pro-regime troops to retake the territory it now holds, which is overwhelming Sunni and was previously in the hands of non-Isil Sunni-led rebels.

The Saudis are also testing American willingness to “lead from the front” in Syria in the face of the apparent defeat of their favoured rebels at the hands of an assertive Russian intervention.

“Saudi Arabia will not step back from its offer to send ground troops to Syria as part of an International Coalition operation,” Mohammed al-Yahya, a London-based Saudi analyst said.

‘The warring parties in Syria are constantly sinking to new depths, without apparently caring in the slightest about the death and destruction they are wreaking across the country’
Prince Zeid Ra’ad al-Hussein

“The strategies used to fight Isil so far have not adequately weakened it, let alone eliminated it. It has become clear that Assad and the forces allied to him, namely Hizbollah, Russia, and Iran, are focusing on fighting the Assad regime’s opposition, not Isil.” Meanwhile on the ground, Russian-backed Kurdish forces took new ground from the rebels near the Turkish border, seizing the Minnegh air base, a highly symbolic target as it was seized from the regime first by Isil and then from them by non-Isil rebels two years ago after some of the fiercest battles of the whole war.

The UN High Commissioner for Human Rights Prince Zeid Ra’ad al-Hussein said more than 50,000 people had now been displaced north of Aleppo in the latest bout of fighting, calling the situation “grotesque”.

“The warring parties in Syria are constantly sinking to new depths, without apparently caring in the slightest about the death and destruction they are wreaking across the country,” he said.