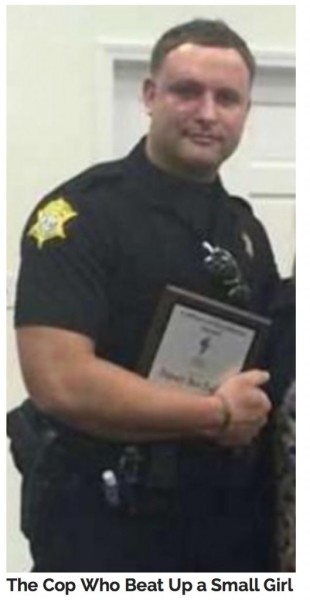 – Shocking Video – Cop Flips Female Student From Desk, Slams Her to Ground and Drags Her Across the Floor:

If you still haven’t heard of the psychotic violence perpetrated on a high school girl by Senior Deputy Ben Fields, it’s time to get up to speed. If you want a gauge as to how far this society has fallen, this is all you need to see.

First, a little background from the AP:

COLUMBIA, S.C. (AP) — A school resource officer in South Carolina is on leave and his boss has asked the Justice Department and the FBI to investigate after a video showed him flipping a female high school student from her desk to the floor and dragging her across a classroom.

The sheriff’s department said no one was hurt during the confrontation, which was captured on cellphones by several students and posted online. One student said it all started when the girl pulled out her cellphone and refused her math teacher’s request to hand it over during class.

During the moments captured on video, Fields can be seen standing over the girl, asking her to stand up. The girl remains seated and the officer wraps a forearm around her neck. The desk then flips and the girl is slammed backward onto the floor, where the officer tosses her toward the front of the classroom and handcuffs her.

A second student who verbally objected to the girl’s treatment also was arrested.

Go ahead and read that again.

Both girls were charged with disturbing schools and released to their parents. Their names were not released, but the second student, Niya Kenny, told WLTX-TV that Deputy Fields’ use of force shocked her. Her mother, Doris Kenny, said she’s proud her daughter was “brave enough to speak out against what was going on.”

Lt. Curtis Wilson confirmed that Fields is white and the students are black, but told The Associated Press in an email to “keep in mind this is not a race issue.”

Tony Robinson Jr., who recorded the final moments of the confrontation, told WLTX that it began when the teacher tried to confiscate a phone the girl took out during class. She refused, so he called an administrator, he said.

Welcome to America’s school system. A teacher can’t even handle a slightly disruptive student on his own without calling cop into the classroom. Never once in my entire life did I see a cop called into a classroom, despite seeing chaos that makes “not handing over a cellphone” look like the equivalent of putting a shiny apple on the teacher’s desk. Absolutely revolting.

Now watch the video. It’s will make your blood boil:

To make matters worse, this cop has a history of aggressive, violent behavior. As the AP noted:

Fields has been accused of excessive force and racial bias before, but has prevailed in court so far.

Trial is set for January in the case of an expelled student who claims Fields targeted black students and falsely accused him of being a gang member in 2013. In another case, a federal jury sided with Fields after a black couple accused him of excessive force and battery during a noise complaint arrest in 2005. A third lawsuit, dismissed in 2009, involved a woman who accused him of battery and violating her rights during a 2006 arrest.

And that’s just the start of it. He attacked a veteran and his wife back in 2005, as reported by the New York Daily News:

Martin said the beefy officer “snapped” after he called him “dude,” and slammed him on the ground. He began pepper-spraying the helpless veteran, but Martin said he was trained in the military to resist the chemicals. An entire canister of the stuff failed to disable Martin.

“He became even more violent because I didn’t react like most people would,” Martin told the News.

His wife at the time, Tashiana Rogers, witnessed the fracas, and ran outside to take photos of the violent encounter with her cellphone.

That’s when Fields called for his partner to “get her black ass,” Martin said. The officer grabbed her phone and deleted the photos.

Fields then called for backup.

“I’m watching my wife get beat up in front of me, and there’s nothing I can do about it,” Martin said.

During the arrest, Martin told Fields the rough arrest would lead to a lawsuit.

“I’m glad Johnny Cochran is dead,” Fields shot back, according to Martin.

The officer also told Martin as he was cuffed that “you’re just another notch in my belt,” according to court documents.

“That was shocking. I was definitely shocked that the jury did not find in her favor,” Mobley said.

Rogers was shocked too. She worries Fields was allowed to operate with impunity — giving him freedom to terrorize high school students.

“I felt like if he had felt the consequences from 2005, this wouldn’t happen today,” she told the Daily News.

Precisely. This is exactly what happens when people in power fail to be held accountable.

Yet it gets even worse. As the Daily News reports, Ben Fields actually received the Richland School District Two Culture of Excellence Award from the Lonnie B. Nelson Elementary School in 2014. 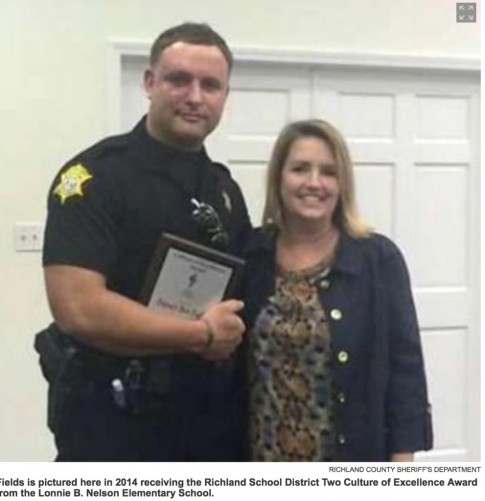 Someone please lock this guy up and throw away the key.