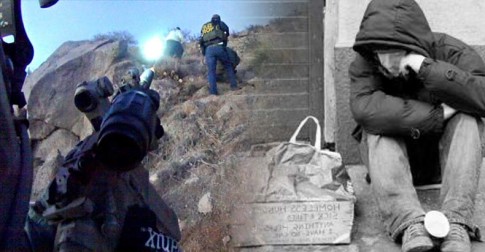 – Family Of Homeless Man Killed by Cops Gives 200K Of Settlement To Help the Homeless:

Albuquerque, NM – The police killing of homeless camper James Boyd shocked the world last year, after video of the murder surfaced, showing Boyd surrendering to police before he was killed.

Boyd was shot and killed by Albuquerque Police officers Keith Sandy and Dominique Perez in the foothills of the Sandia Mountains after a local resident complained that he was ‘illegally camping.” Boyd was shot as he turned away from police. An autopsy confirmed that Boyd was shot in the back.

Boyd’s family recently won a $5 million settlement from the city, and they have been using a large part of the money to help the local homeless community. Boyd’s brother, Andrew Jones, announced this Friday that the family will be donating $100,000 to St. Martin’s Hospitality Center and another $100,000 to Health Care for the Homeless.

“They are the two organizations I know my brother used, and they helped him as much as they possibly could. They are probably the two better organizations in the city and I know they will help a lot of people with the money,” Jones told KOB.

Jones also said that they will be starting a program at St. Martin’s in James Boyd’s name, which will help individual homeless people get back on their feet.

“They just don’t know where to go to find the correct help. They just need to get the help and get to the place they need to be. When they realized we could help them, they accepted it just fine,” Jones said.

The officers responsible for Boyd’s death have yet to stand trial, but they will reportedly be in court next summer to face charges for their crimes.