– “If We Don’t Find A Solution Today, It’s The End Of The European Union” – Refugee Crisis Hits Tipping Point:

After escalating for months, Europe’s refugee crisis hit its most serious tipping point yet, when when earlier today European Union leaders held a mini-summit on Sunday debating whether to send hundreds of guards to its borders with the western Balkans, as well as deploying more ships off Greece, as the bloc seeks to balance Germany’s welcome for refugees with tougher security measures.

So far, over 680,000 migrants and refugees have crossed to Europe by sea so far this year, fleeing war and poverty in the Middle East, Africa and Asia, according to the International Organization for Migration. Their goal has been Germany, which has promised sanctuary, however as a result of a populist backlash and concerns over the economy, Merkel’s popularity has taken a major hit, sliding to the lowest level in four years. 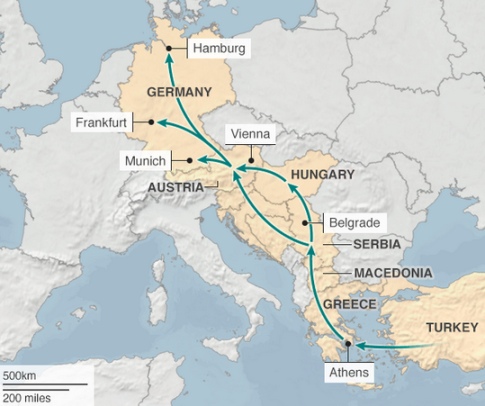 Taking place just two weeks after a full EU summit, the meeting was sought by German Chancellor Angela Merkel. According to Reuters,“many see it as an attempt by Juncker and Merkel to raise pressure on central and southeast European states to coordinate among themselves in managing the migration flow in a more humane way and end a series of unilateral actions.”

Central and eastern European leaders meeting in Brussels may agree to send 400 border guards and set up new checkpoints if the EU’s frontier states drop their policy of giving arrivals passage to other countries, according to a draft statement seen by Reuters that must still be agreed.

According to Reuters, the draft said that “we commit to immediately increase our efforts to manage our borders,” which, if formalized, would be a 16-point plan and the latest step in drawing up a common approach to dealing with the thousands of migrants streaming into the EU every day from the Middle East, North Africa and Afghanistan.

Europe has been forced to tread lightly as Bulgaria, Serbia and Romania said they would close their borders if Germany or other countries shut the door on refugees, warning they would not let the Balkan region become a “buffer zone” for stranded migrants.

In recent week, the fate of the European “Schengen” Customs Union has been in doubt following Hungary’s decision to close its border with Serbia and Croatia which prompted others to follow, stranding tens of thousands in dire conditions as temperatures drop.

The traditional European response to another systemic risk has been the usual fallback: chaos, as the European Union has been so far unable to implement a coherent, credible response.

Rights group Amnesty International said the 28-country bloc could not afford to end another meeting without an agreed plan. “As winter looms, the sight of thousands of refugees sleeping rough as they make their way through Europe represents a damning indictment of the European Union’s failure to offer a coordinated response to the refugee crisis,” said John Dalhuisen, Amnesty’s director for Europe and Central Asia.

And while Europe dithers, the lack of a common policy is straining ties between European leaders, raising questions about the EU’s future.

It was just a few days ago that Hungary warned that Europe’s future is at stake, when it announced it would seal its border with Croatia.  “This is the second-best option,” Hungarian foreign minister Szijjarto told reporters. “The best option, setting up an EU force to defend Greece’s external borders, was rejected in Brussels yesterday.”

Now others are joining in.

Yesterday, it was the turn of Austrian Chancellor Werner Faymann who told the Austrian Kronen Zeitung that “now the speech is about either a common Europe or about a quiet collapse of the European Union. One path is burdensome, difficult and supposedly long and the other one would lead to the chaos.”

Then moments ago, Slovenia Prime Minister was quoted by Reuters during his arrival at the latest mini-summit, as saying “if European leaders fail to agree a plan to counter the sudden inflows of refugees, it could mean the end of the European Union.”

“If we don’t find a solution today, if we don’t do everything we can today, then it is the end of the European Union as such,” Prime Minister Miro Cerar said. “If we don’t deliver concrete action, I believe Europe will start falling apart,” he told reporters.

Considering this is the same Europe, which five years after the first Greek default has been unable to find any solution to its economic troubles – or at least a solution that does not benefit only the top 1% –  aside from kicking the can time and again and covering up record amounts of debt with even more debt, we are skeptical Europe will “deliver concrete action” today, or at any one point in the near and not so near future.

Which may be just what Europe wants.

AIG’s explanation: “To use global issues as excuses to extend its power”

And there it is: in four simple bullet points laid out in a 7 year old presentation, a prediction which has come true time and again: from the endless Greek bailouts, to the austerity paradox, to European youth unemployment stubbornly flat at 50% for years in many “southern” European nations, to Europe’s QE creating the deflationary impulse it is said to be fighting against, and now – to the “refugee crisis”, it is all playing out as if according to some unseen script.