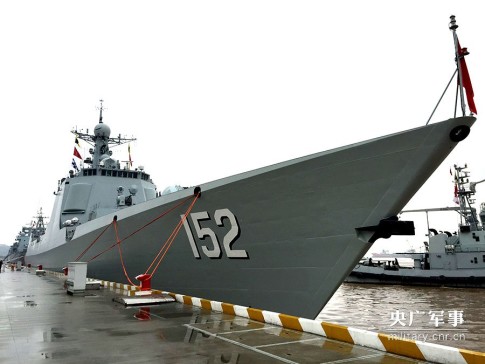 At a time when the US and China are practically at arms over the artificial islands in the South China Seas, with the US sending warships on location to patrol (despite White House Spokesman Josh Earnest saying on Oct. 8 that U.S. warships “should not provoke significant reaction from the Chinese”) and a stunned China responding “What On Earth Makes Them Think We Will Tolerate This“, the last thing we thought we would see right now was three Chinese warships about to port in Florida’s Naval Station Mayport.

“Three vessels are on an around-the-world deployment and will conduct the goodwill visit after completing port calls in Europe,” read a statement from Navy Region Southeast. “The amphibious assault ship USS Iwo Jima (LHD-7) will serve as the host ship. In Mayport, sailors from both navies will participate in sporting events and interact during ship tours.”

The close navy encounters go both ways: yesterday, a collection of about two dozen U.S. naval officers paid a visit to the Chinese aircraft carrier Liaoning in China, according to Chinese state controlled press and confirmed by the Navy.

U.S. officials would not elaborate if there would be an at-sea training component to the visit slated to run from Nov. 3rd to the 7th.

What makes the visit particularly awkward is that, as Navy officials stressed, the visit was planned months in advance and comes just as Washington and Beijing are at loggerheads over territorial possessions in the South China Sea.

It is also notable, that in addition to the Mayport visit, China has sent the flotilla to first ever port visits in the Baltic Sea in ports like Stolkholm, Sweden and Helsinki, Finland as part of the world tour. Perhaps it is just part of China’s due diligence.

Some US Congressmen are not too happy about the Chinese visit: “While the U.S. has been fervently cultivating military-to-military exchanges, China’s behavior at sea has not tracked with its rhetoric of a ‘peaceful rise’,” read a Thursday statement from Rep. Randy Forbes, from the chair of the House Armed Services Subcommittee on Seapower and Projection Forces, to USNI News.

“Engagement like the upcoming Chinese visit to Mayport should not be done purely for engagement’s sake, and I hope that in addition to increased transparency, we start to see China moderate its other destabilizing activities.”

However, the most interesting news is that according to the US Naval Institute, despite much posturing, the Obama administration has not yet dispatched ship toward China, and instead has been merely weighing for weeks whether or not it will send a freedom of navigation mission within 12 nautical miles — the internationally recognized maritime border — of features in the Spratly and Paracel China has reclaimed from the sea.

It would appear that Obama was once again all talk and once China threatened to call the U.S. bluff and warned it would use force, the US desire for confrontation promptly evaporated.