– Bernanke Says Economy Needs To Crash Periodically So We Can Be Sure We’re Pushing It Hard Enough:

If you’re a journalist, it’s always exciting to get the chance to interview courageous people – you know, war heroes, revolutionaries, innovators, political dissidents and the like.

Of course when it comes to courage, there’s scarcely a man alive that compares to Ben Bernanke. Indeed, he even had the courage to use the word “courage” in the title of a book about monetary policy knowing very well that doing so would likely lead to all manner of contemptuous ridicule.

FT’s Martin Wolf recently got the opportunity to chat with courageous Ben over “firm, juicy” swordfish and grilled halibut at McCormick & Schmick’s in Chicago. Predictably, the interview is replete with cringe worthy soundbites, some of which we present below.

First, Wolf asks Bernanke about the contention that the policies pursued by the Fed have served to increase inequality. Recall that Blogger Ben penned a lengthy post on this topic several months ago. You can read our critique here. Generally speaking, the former Fed chair resorts to the same line of argumentation to defend himself:

“Rising inequality’s an important issue for the US. But it is a long-term trend that goes back at least to the 1970s. And the notion that the Fed has somehow enriched the rich through increasing asset prices doesn’t really hold up, for a couple of reasons: one is that the Fed basically has returned asset prices and the like back to trend; another is that the reason stock prices are high is because returns are low.”

“If people are unhappy with the effects of low interest rates, they should pressure Congress to do more on the fiscal side, and so have a less unbalanced monetary-fiscal policy mix. This is the fourth or fifth argument against quantitative easing after all the other ones have been proven to be wrong. And this is certainly not an argument for the Fed to do nothing and let unemployment stay at 10 per cent.”

Obviously, none of that makes much sense. The first argument is just silly. In a nutshell, he’s saying this: the poor have been getting poorer vis-a-vis the rich since the 70s, so what difference does it make if the Fed accelerated the trend a little bit? Second, we’re not entirely sure what “back to trend” means here. If he means “skyrocketed 200% to all-time highs”, well then sure, we suppose he’s correct. Third, we’re not sure that helping the rich and hurting savers are in fact two “inconsistent” ideas. You can help the rich (i.e. inflate the prices of the assets they own) while simultaneously making it a bummer for them to hold cash in bank savings accounts. If my equity portfolio is up 100% in a year, I’m not going to be overly concerned about the fact that the million dollars I have in a savings account only earned $10,000 in interest that year versus $40,000. Besides, I don’t need to stash money in a savings account when I can just buy a Picasso for $180 million and watch it appreciate three fold on the back of the very same policies that are driving my stocks higher. Finally, “blame fiscal policy” has become central bankers’ standard defense when it comes to explaining away the fact that monetary policy hasn’t worked.

Moving on, Wolf asks Bernanke to address to contention that by forestalling creative destruction, the Fed is allowing the vestiges of speculative excess and misallocated capital to hang around from crisis to crisis. Unsurprisingly, Ben dismisses that argument out of hand:

“As for allowing the economy to go into collapse, this is the Andrew Mellon [US Treasury secretary] argument from the 1930s. And I would think that, certainly among mainstream economists, it has no credibility. A Great Depression is not going to promote innovation, growth and prosperity.”

Probably not, but then again, “mainstream economists” are almost always wrong and Bernanke might want to take a look at the role the Fed has played in driving down crude prices and thus contributing to the global deflationary supply glut before deriding the creative destruction argument.

It only gets sillier from there as Bernanke goes on to claim that “serious studies” show no link between the Fed’s post-dot com bust policies and the housing bubble:

“The first part of a response is to ask whether monetary policy was, in fact, a major contributor to the housing bubble and all that happened. Serious studies that look at it don’t find that to be the case. People such as Bob Shiller [a Nobel laureate currently serving as a Sterling professor of economics at Yale University], who has a lot of credibility on this topic, says that: it wasn’t monetary policy at all; it came from a mania, a psychological phenomenon, that took off from the tech boom and moved into housing.”

Bernanke is essentially saying that low interest rates had nothing to do with the housing bubble. Rather, the crisis was actually your fault for being crazy.

As for the idea that it “took off from the tech boom”, Ben might want to study his history a bit closer – the Fed played a role in inflating the dot com bubble too.

He then proceeds to spread the blame around by chiding reckless regulators and the structure of the repo market:

“The second general argument is that, while I think the Fed had some complicity, it wasn’t so much in monetary policy but, together with the other regulators, in not constraining the bad mortgage lending and excessive risk-taking that was permeating the system. This, together with the structural vulnerabilities in the funding markets, and so on, led to the panic.”

Next, Bernanke says speculating about whether the system is stable is “fool’s game” because “either it is fine, in which case nobody remembers your prediction, or something happens, and then . . . ” He doesn’t finish, but we’ll finish the sentence for him “…and then you look like an idiot.” This is something Bernanke knows from first hand experience:

And the punchline to the entire interview comes when Bernanke recounts an anecdote he got from a former professor:

“My mentor, Dale Jorgenson [of Harvard], used to say — and Larry Summers used to say this, too — that, ‘If you never miss a plane, you’re spending too much time in airports.’ If you absolutely rule out any possibility of any kind of financial crisis, then probably you’re reducing risk too much, in terms of the growth and innovation in the economy.”

So, according to Ben Bernanke, the economy needs to crash every few years to confirm it’s being pushed hard enough. Perhaps that logic helps to explain why the FOMC has become a perpetual bubble blowing machine. 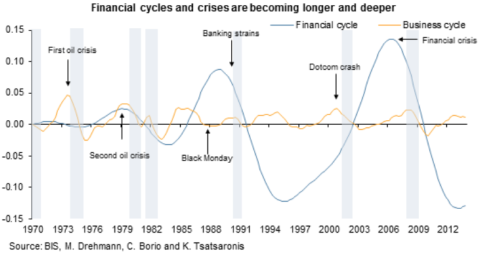 … it’s because they are.