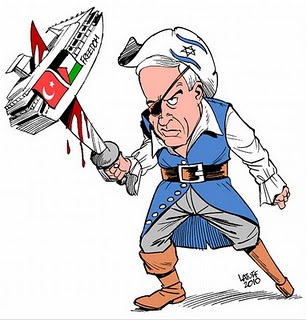 ” …then you must destroy them totally. Make no treaty with them and show them no mercy.” (Deuteronomy 7:1-2)

“…do not leave alive anything that breathes. Completely destroy them…as the Lord your God has commanded you…” (Deuteronomy 20:16)

I am here to announce as loud as I can, there is no need for any ‘International’, ‘impartial’ or ‘independent’ inquiry into the latest Israeli massacre on the high sea. Though the Israeli opposition to such an inquiry is there to suggest that the Israelis have much to hide, the truth of the matter is actually deeper. If you want to grasp what underlies the Israeli deadly barbarism all you have to do is open the Old Testament.

Though it is certain that there is no ethnic or racial continuum between the Biblical Israelites and the Khazarians who lead the Jewish state and its army, the similarities between the murderous enthusiasm described in Deuteronomy and the current string of Israeli lethal actions cannot be denied. Israel is a murderous society not because of any biological or racial lineage with its imaginary ‘forefathers’. Israel is deadly because it is driven by a fanatical tribal Jewish ideology and fueled by a psychotic merciless Biblical poisonous enthusiasm.

The Jewish State is beyond the law. It doesn’t follow any recognised universal value system either. In recent years Israel flattened Lebanon (2006) and left more than 3000 civilians dead, it managed to shell an UNRWA shelter with white phosphorus (2009) and left Gaza with 1500 fatalities most of them women, children and elders, earlier this year it assassinated in Dubai using forged foreign passports, last week we saw the Kosher navy slaughter peace activists in international waters.

The emerging forensic reports of the massacre suggests  Israeli executions on board the Mavi Marmara, reading the accounts of the Turkish survivors, and following the Israeli spokesmen’s justifications of their killing squads actions, leaves no room for doubt. The Israeli society has past the no return zone. In fact, it must have drifted away from humanity a long time ago. It may be also reasonable to argue by now, that the Zionist initial attempt to ‘erect a new civilized Jew’ should be realized as a total failure. In fact the Israeli Jew is the most brutal of them all, even more deadly than the fictional character depicted by Tarantino’s film Inglorious Bastards.

One way to explain the rapid moral deterioration of the Jewish State is to point out that Zionists have never really committed to ethics. They were quick to learn that rather than truly internalizing the meaning of humanism, a spin would serve their cause as effectively.

The entire Hasbara (propaganda) project is grounded on a dissemination of lies. For years the Hasbara project, which has been supported by Sayanim all along,  was there to present Israel as a ‘Western’ and ‘democratic’ nation in a ‘sea of Arabs’. All that time the Jewish State was inflicting pain on its neighbours, murdering, starving and  ethnically cleansing the indigenous people of the land.

Enough is enough, it is time to name and shame every Israeli and Zionist infiltrator within political circles, media and academia. This shouldn’t be complicated at all because until very recently those Sayanim and traitors within our midst were doing it all in the open.

From Aggression to Victimhood

However, the Israelis are not just an ordinary murderous collective. As much as they were enthusiastic to unleash hundreds of their most brutal military unit (Fleet 13) against unarmed peace activists, the Israelis also insist on regarding their commandos as a bunch of innocent victims. It was  amusing to follow Israeli officials and representatives talking about their ‘lynched commandos’ who were ‘attacked’ as soon as they were dropped from helicopters. “What did the commandos expect pro-Palestinian activists to do once they boarded the ships – invite them aboard for a cup of tea with the captain on the bridge?” wondered the Guardian editorial just one day after the massacre.

The apparent shortage of an Israeli capacity to understand that they were the aggressors in a military raid  that they themselves initiated, is symptomatic of the Jewish political incomprehension of the notion of history and of historical causality. From a Jewish perspective, history always starts where a Jewish suffering is detected. For the Israelis the event on the Mavi Marmara started only when the first kosher commando confronted resistance on the upper deck. In the Israeli press, the fact that Israeli commandos were actually the attackers was completely neglected. They in fact took part in a criminal military raid, they were dropped from Israeli military helicopters, they landed on a civilian ship carrying humanitarian aid in international waters. For the Israelis the Mavi Maramara massacre event was isolated from the conflict or any understanding of the conflict.

Within the discourse of Jewish politics and history there is no room for causality. There is no such a thing as a former and a latter. Within the Jewish tribal discourse every narrative starts to evolve when Jewish pain establishes itself. This obviously explains why Israelis and some Jews around the world can only think as far as ‘two  state solution’ within the framework of 1967 borders. It also explains why for most Jews the history of the holocaust starts in the gas chambers or with the rise of the Nazis.  I have hardly seen any Israelis or Jews attempt to understand the circumstances that led to the clear resentment of Europeans towards their Jewish neighbors in the 1920’s-40’s.

I am pretty convinced that Israel and the Jewish national project is not going to recover from this last high sea massacre. The reason is simple. In order to save itself of its doomed fate, Israel would need to  look in the mirror. This is not going to happen. By the time Israel looks in the mirror it would become a self-hater. Israel won’t take the risk.

Instead of looking in the mirror the Jewish tribal agitator reverts to spin. The Hasbara man releases a clumsily produced video that can be easily dismissed.

In case some Westerners have failed to see it until now, it is not just the Palestinians, Arabs or Muslims who fall victims to the deadly Biblical practice. In fact Zionism doesn’t really distinguish between Goyim. From a Zionist perspective every Gentile is a potential enemy. This must explain why Israel possesses so many nuclear bombs.

As one may guess, an atomic bomb is not exactly something you use against your next door neighbor. Israel’s nuclear arsenal is not there to deter the Palestinians or the Syrians. The Israeli Bomb is there for us, the Brits, the Turks, the French, the Russians, the Chinese, in short the rest of humanity. Israel’s nuclear arsenal should be realized in reference to Masada, the first century kosher fortified bunker where a few Jewish extremists committed a suicidal act just not to surrender to the Romans.

The new Israelites have an Armageddon scenario in mind. Their philosophy is pretty simple, from Auschwitz they took the ‘never again’ (like a lamb to the slaughter). From Masada they deduced their survival motto, ‘if we are going down, this time we take everyone with us’. This is in fact the true Israeli interpretation of the story of Samson, the Biblical genocidal murderer who pulled down a Philistine shrine on himself together with some other 3000 children, women and elders.

I guess that with Israeli nuclear submarines stationed in the Gulf and last week’s slaughter in the high seas the nations do not need any more warnings. In fact there is no way to get the Israeli nation ‘off the tree’. All that is left for world leaders to do, is to meet amongst themselves and decide together how to dismantle this morbid collective without turning our planet into dust