… or … because of major gun control. 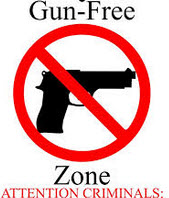 – Someone In Chicago Is Shot Every 2.8 Hours (Despite Major Gun Control):

Having pointed out the surge in gun sales that has accompanied many of the largest mass shootings in America (and the government’s instant knee-jerk reaction to tighten gun control, perhaps ignoring the mental problems many Americans face), and earlier noted that ‘mass shootings’ are now running at a pace of more than 1 per day in America, we thought DailyCaller.com’s Mike Piccione’s intriguing report detailing the supposed “gun-free-zone” of Chicago provided some crucial color that few seem willing to listen to…

Someone in Chicago has been shot every 2.84 hours this year for a total of 2,349 shootings during the period of January 1, 2015 to October 6, 2015, according to crime stats published by the Chicago Tribune.

This year, Chicago is expected to eclipse the previous milestone of a shooting every 3.38 hours in 2014 with a total victim count of 2,587.

But – Chicago ranks as one of the most regulated cities in the nation for gun control.

Concealed carry is almost nonexistent. To purchase a gun or ammunition requires a Firearm Owners Identification card in the entire state of Illinois, and additionally, a Chicago Firearm Permit – which is required to possess a firearm in Chicago.

Not only are the people heavily regulated in Chicago, but guns are also heavily regulated. Any long gun with a grip protruding from the stock or a firearm with a telescoping stock is prohibited and classified as an “assault weapon.”

Magazines are limited to a 12-round capacity.

Even a spring-powered pellet gun with a muzzle velocity of 700 feet-per-second is classified as a “firearm,” although it does not use gun powder, the component that puts the “fire” in “firearm.”

A stun-gun — a non-lethal device with no projectile — is considered a deadly weapon and cannot be carried for self-defense.

Chicago, for all intents and purposes, is a “gun-free zone.”

But all the state and city regulations associated with firearms in Chicago have failed to produce a safe city, and these are the policies that President Obama and Secretary Clinton wish to extend to the rest of the country.

While saying that “criminals go out-of-state to places where it is easier to obtain guns” is often used to push gun control, it illustrates that criminals ignore gun laws in every state and that onerous access to Second Amendment rights on law abiding citizens doesn’t stop crime.

Clinton’s campaign platform includes a call for federal legislation mandating background checks on all private firearms transfers and sales. Clinton also wants to repeal the “Protection of Lawful Commerce in Arms Act.” That law protects firearm manufacturers from lawsuits for negligent use of firearms.

President Obama, through is spokesman Josh Earnest, has announced, “The president has frequently pushed his team to consider a range of executive actions that could more effectively keep guns out of the hands of criminals and others who shouldn’t have access to them. That’s something that is ongoing here.”

Per the president’s policy, Chicago has taken every action “that could more effectively keep guns out of the hands of criminals and others who shouldn’t have access to them.”

Yet the shootings continue to rise…