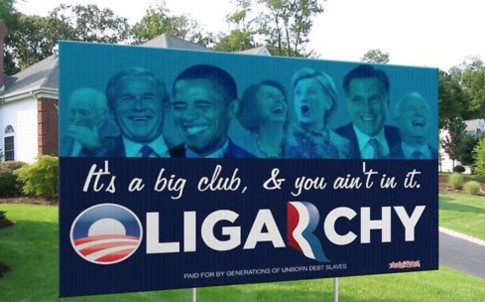 It’s a rare and precious moment when a politician does something which perfeclty demonstrates what he or she really thinks about democracy and power. This is one of those times.

The Supreme Court, in its Citizens United decision, ruled that corporations have a First Amendment right to spend unlimited amounts in elections. Now politicians in Kentucky are claiming they have a Constitutional right to receive gifts from lobbyists.

In a lawsuit filed in U.S. District Court, Republican Kentucky state Sen. John Schickel, along with two Libertarian political candidates, are suing to overturn state ethics laws, claiming that the campaign contribution limit of $1,000 and a ban on gifts from lobbyists and their employers are a violation of their First and Fourteenth Amendment rights.

The lawsuit notes that lobbyists and the employers of lobbyists are prohibited by Kentucky law from inviting legislators to parties, offering gifts, or paying for food for legislators. “This infringes on the legislator’s, lobbyist’s, and employer of lobbyist’s right to freedom of association, and freedom of speech,” Schickel claims in the suit.

Kentucky’s ethics laws were passed in 1992 after an FBI investigation exposed a number of local politicians selling their votes.

New York is Drowning in Bribes and Corruption by Pam Martens