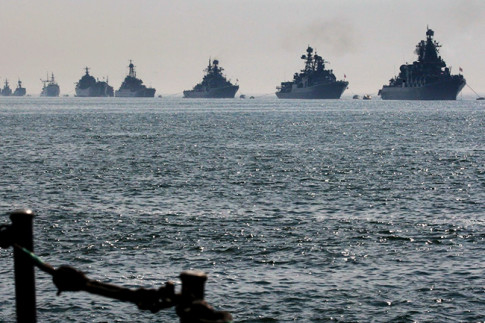 Flotilla, led by the ship of the Russian Black Sea Fleet, sailed from Sevastopol, in Crimea, and late on Sunday, September 27, arrives at the destination.

The exercises involved and frigates with guided missiles “Smetlivi” and landing ship class “tapir”, and a number of auxiliary ships.

They will be joined by another frigate and missile gunboat, which were previously transferred from the Black Sea into the Mediterranean Sea.

Civil Aviation had earlier warned that bypasses the area between Cyprus and the Russian naval base in the Syrian city of Tartus, according to “Sputnik”.

During the exercises, which will take up in October, the sailors will participate in more than 40 different combat missions, including missile and artillery fire on targets on the surface and in the air, air defense and attacks on ships, as well as search and rescue operations and relief ships in distress.

– Chinese Navy sets off for Syria:

According to the Russian Senator Igor Morozov, Beijing has taken decision to take part in combating IS and sent its vessels to the Syrian coast.

Igor Morozov, member of the Russian Federation Committee on International Affairs claimed about the beginning of the military operation by China against the IS terrorists. “It is known, that China has joined our military operation in Syria, the Chinese cruiser has already entered the Mediterranean, aircraft carrier follows it,” Morozov said.

According to him, Iran may soon join the operation carried out by Russia against the IS terrorists, via Hezbollah. Thus, the Russian coalition in the region gains ground, and most reasonable step of the US would be to join it. Although the stance of Moscow and Washington on the ways of settlement of the Syrian conflict differs, nonetheless, low efficiency of the US coalition acts against terrorists is obvious. Islamists have just strengthened their positions.

As Leonid Krutakov told Pravda.Ru in an interview, the most serious conflict is currently taking place namely between China and the US. Moscow may support any party, the expert believes, and that is what will change the world order for many years.