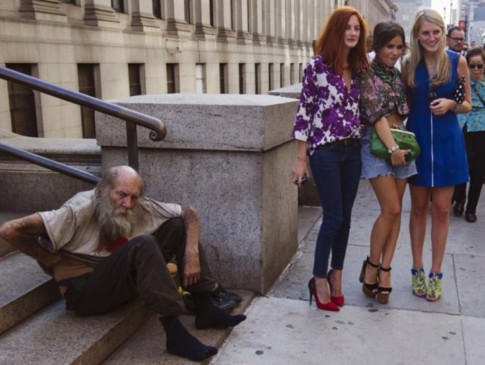 Puleo added he has “never seen” the homeless situation this bad.

Dilcy Benn, president of the union’s Local 1505, said more than 100 of the 1,000 parks workers she represents are living in shelters and at least another four, including Torres, are living on the streets on Staten Island and The Bronx.

One of the main data points that pundits and politicians who claim there is an “economy recovery” point to is jobs created. Please tell me, what good is a job if it can’t earn you a roof over your head?

Welcome to the Oligarch Recovery.

Angelo Torres punches in to work at 5 a.m. each weekday and spends the next eight hours cleaning up debris on Staten Island’s Midland Beach.

It’s a grueling job, says the veteran Parks Department maintenance worker, but also a welcome escape from the uncertainty of living on the streets as one of the city’s more than 300 full-time workers who are homeless.

“I cry every night thinking this isn’t really happening, but it is,” Torres, 45, told The Post.

Torres earns $33,662 a year but says it’s not enough to find four walls and a roof to call his own in a city where, according to StreetEasy, the median rent is $2,690 a month.

So he has spent the past four months living out of his beat-up 2001 Chevy Blazer with tinted windows. He has two small bags of belongings to his name.

“Everyone’s like, ‘Take a shower and wash your clothes!’ They don’t know what is going on. It hurts a lot. I work for the city. I never thought this would happen to me,” he said.

“A city job was always the gateway out of poverty,” said Joseph Puleo, president of Local 983 of District Council 37, which represents 3,000 blue-collar city workers.

“You knew you had a pension, a good job and didn’t have to worry, but those days are gone,” he said.

Puleo added he has “never seen” the homeless situation this bad.

Dilcy Benn, president of the union’s Local 1505, said more than 100 of the 1,000 parks workers she represents are living in shelters and at least another four, including Torres, are living on the streets on Staten Island and The Bronx.

It was unclear how many members were homeless before they began working for the city. The city’s Department of Homeless Services refused to comment.

Sokunbi Olufemi, of Communications Workers of America Local 1182, which represents 1,800 city traffic and sanitation enforcement agents, places much of the blame on de Blasio.

“Our mayor is traveling all over the world and most states in America talking about payment equality, but he hasn’t fixed the roof in his own house,” Olufemi said. “His roof is leaking, and he refuses to fix it.”

That’s how city employees are treated in the one place that benefited more than any other from the taxpayer bailout of Wall Street. At least financial service industry bonuses were saved.

For more on the “Oligarch Recovery,” see:

The Oligarch Recovery – Renting in America is Most Expensive Ever

Use of Alternative Financial Services, Such as Payday Loans, Continues to Increase Despite the “Recovery”

1 thought on “In New York City, Workers with Full Time Jobs Are Living in Homeless Shelters”