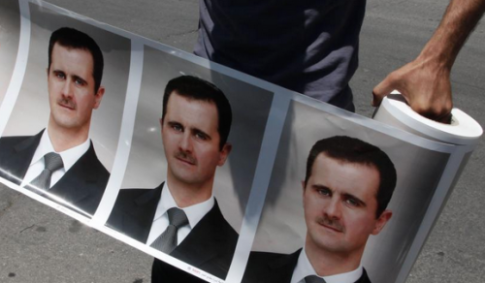 Now that Europe’s worsening refugee crisis and Russia’s stepped up support for the regime of Bashar al-Assad have (finally) focused the world’s attention on Syria’s four-year, bloody civil war, inquiring minds want to know: how did it happen that the country, which is now at risk of becoming a failed state, descend into chaos?

Of course when we speak of “inquiring minds” we mean those of the general public which, to this point, has remained largely ignorant of the fact that hundreds of thousands of people are dying in a place that shares a border with the country the US supposedly just got done “liberating.”

Generally speaking, the line you’ll get from the mainstream media is that Syria is just one more example of a Mid-East country where the populace finally reached its breaking point with the injustices created by the brutal regime of an evil autocrat. The resultant chaos, the narrative continues, created a breeding ground for terror which explains why Raqqa has become the de facto capital for ISIS, the Western media’s boogeyman par excellence.

Not to put too fine a point on it – and this won’t surprise anyone who frequents these pages – but that narrative is pure, unadulterated garbage. The real story (again, generally speaking), is that Syria is pivotal for the existing balance of power – and not only the regional balance of power, but the global balance of power as well. The alliance between Bashar al-Assad’s Syria and Moscow, Tehran, and Hezbollah serves as a kind of counterbalance to cooperation among the US, Saudi Arabia, Qatar, and Turkey (among others). Should the Assad regime be allowed to fall and the West allowed to influence the post-regime political outcome, the scales would tip, Russia would lose its naval base at Tartus, and Iran’s access to Hezbollah, not to mention the scope of its regional influence would be severely constrained. Assad’s move to support the Islamic Pipeline while rejecting the Qatar-Turkey pipeline was a manifestation of the situation described above.

But even as the world begins gradually to come around to the idea that the US and the West might well have had a role in supporting many of the rebel groups that are currently fighting for control of Syria, the notion that Washington might have intentionally started the Syrian civil war by provoking Sunni extremists (among other tactics) is still seen by many as too horrific a possibility to take seriously. Unfortunately – as a declassified secret US government document obtained by the public interest law firm Judicial Watch (profiled here) suggested earlier this year – it’s highly likely that the US intentionally destabilized the Assad regime in pursuit of Washington’s geopolitical interests. That deliberate destabilization has now led to hundreds of thousands of deaths and untold human suffering.

As it turns out, there’s still more evidence available to support the notion that Syria’s civil war was engineered by the Pentagon. In his new book, Julian Assange highlights a cable from acting Deputy Chief of Mission in Syria William Roebuck who was stationed in Damascus from 2004-2006. It’s available in full from Wikileaks and below are what we believe to be the most notable excerpts, presented without further comment.

(S) Summary.  The SARG ends 2006 in a much stronger  position domestically and internationally than it did 2005.  While there may be additional bilateral or multilateral  pressure that can impact Syria, the regime is based on a  small clique that is largely immune to such pressure.  However, Bashar Asad’s growing self-confidence )- and  reliance on this small clique — could lead him to make  mistakes and ill-judged policy decisions through trademark  emotional reactions to challenges, providing us with new  opportunities.  For example, Bashar,s reaction to the  prospect of Hariri tribunal and to publicity for Khaddam and  the National Salvation Front borders on the irrational.  Additionally, Bashar,s reported preoccupation with his image  and how he is perceived internationally is a potential liability in his decision making process.  We believe  Bashar,s weaknesses are in how he chooses to react to  looming issues, both perceived and real, such as a the  conflict between economic reform steps (however limited) and entrenched, corrupt forces, the Kurdish question, and the  potential threat to the regime from the increasing presence  of transiting Islamist extremists.  This cable summarizes our  assessment of these vulnerabilities and suggests that there may be actions, statements, and signals that the USG can send  that will improve the likelihood of such opportunities  arising.  These proposals will need to be fleshed out and  converted into real actions and we need to be ready to move  quickly to take advantage of such opportunities.  Many of our  suggestions underline using Public Diplomacy and more  indirect means to send messages that influence the inner circle.   End Summary.

(S) The following provides our summary of potential  vulnerabilities and possible means to exploit them:

— THE ALLIANCE WITH TEHRAN: Bashar is walking a fine line in his increasingly strong relations with Iran, seeking necessary support while not completely alienating Syria,s  moderate Sunni Arab neighbors by being perceived as aiding Persian and fundamentalist Shia interests.  Bashar’s decision  to not attend the Talabani ) Ahmadinejad summit in Tehran following FM Moallem,s trip to Iraq can be seen as a manifestation of Bashar’s sensitivity to the Arab optic on  his Iranian alliance.

— PLAY ON SUNNI FEARS OF IRANIAN INFLUENCE:  There are fears in Syria that the Iranians are active in both Shia proselytizing and conversion of, mostly poor, Sunnis.  Though often exaggerated, such fears reflect an element of the Sunni community in Syria that is increasingly upset by and focused on the spread of Iranian influence in their country through activities ranging from mosque construction to business. Both the local Egyptian and Saudi missions here, (as well as prominent Syrian Sunni religious leaders), are giving increasing attention to the matter and we should coordinate more closely with their governments on ways to better publicize and focus regional attention on the issue.

— THE INNER CIRCLE:  At the end of the day, the regime is  dominated by the Asad family and to a lesser degree by Bashar Asad,s maternal family, the Makhlufs, with many family  members believe to be increasingly corrupt. The family, and hangers on, as well as the larger Alawite sect, are not immune to feuds and anti-regime conspiracies, as was evident last year when intimates of various regime pillars (including the Makhloufs) approached us about post-Bashar possibilities. Corruption is a great divider and Bashar’s inner circle is subject to the usual feuds and squabbles related to graft and corruption.  For example, it is generally known that Maher Asad is particularly corrupt and incorrigible.  He has no scruples in his feuds with family members or others.  There is also tremendous fear in the Alawite community about retribution if the Sunni majority ever regains power.

— ADDITIONAL DESIGNATIONS: Targeted sanctions against regime members and their intimates are generally welcomed by most elements of Syrian society.  But the way designations are  applied must exploit fissures and render the inner circle weaker rather than drive its members closer together.  The designation of Shawkat caused him some personal irritation and was the subject of considerable discussion in the business community here. While the public reaction to corruption tends to be muted, continued reminders of corruption in the inner circle have resonance.  We should look for ways to remind the public of our previous designations.

— THE KURDS:  The most organized and daring political  opposition and civil society groups are among the ethnic  minority Kurds, concentrated in Syria,s northeast, as well  as in communities in Damascus and Aleppo.  This group has  been willing to protest violently in its home territory when  others would dare not.  There are few threats that loom  larger in Bashar,s mind than unrest with the Kurds.  In what is a rare occurrence, our DATT was convoked by Syrian Military Intelligence in May of 2006 to protest what the Syrians believed were US efforts to provide military training and equipment to the Kurds in Syria.

— HIGHLIGHT KURDISH COMPLAINTS: Highlighting Kurdish  complaints in public statements, including publicizing human rights abuses will exacerbate regime,s concerns about the Kurdish population.  Focus on economic hardship in Kurdish areas and the SARG,s long-standing refusal to offer citizenship to some 200,000 stateless Kurds.  This issue would need to be handled carefully, since giving the wrong kind of prominence to Kurdish issues in Syria could be a liability for our efforts at uniting the opposition, given  Syrian (mostly Arab) civil society,s skepticism of Kurdish objectives.

— Extremist elements increasingly use Syria as a base, while  the SARG has taken some actions against groups stating links to Al-Qaeda.  With the killing of the al-Qaida leader on the border with Lebanon in early December and the increasing terrorist attacks inside Syria culminating in the September 12 attack against the US embassy, the SARG,s policies in Iraq and support for terrorists elsewhere as well can be seen to be coming home to roost.

— Publicize presence of transiting (or externally focused)  extremist groups in Syria, not limited to mention of Hamas and PIJ.  Publicize Syrian efforts against extremist groups in a way that suggests weakness, signs of instability, and uncontrolled blowback.  The SARG,s argument (usually used after terror attacks in Syria) that it too is a victim of terrorism should be used against it to give greater prominence to increasing signs of instability within Syria.