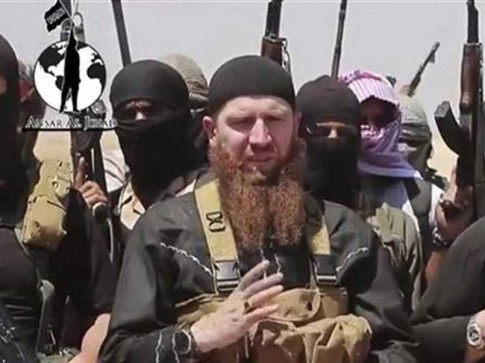 – One of ISIS’ top commanders was a ‘star pupil’ of US-special forces training in the country of Georgia:

Aside from ISIS’ ‘caliph’ Abu Bakr al-Baghdadi, the Georgian ex-commando Omar al-Shishani might be the most recognizable and popular of the powerful militant group’s leaders.

Sporting a recognizable red beard and happy to pose for photos, Shishani has acted as a very public face for some of ISIS’ most notorious successes.

It was Shishani who posed with the stolen US Humvees that ISIS had seized from Mosul and brought back into Syria.

And it was Shishani who had led successful ISIS military campaigns throughout Syria as well as a blitz through western Iraq that put the group within 100 miles of Baghdad.

These military successes are not simply the result of any innate military capabilities. Instead, Shishani spent years conducting military campaigns against the Russians, first as a Chechen rebel and then as a soldier in the Georgian military. During Shishani’s four years in the military, from 2006 to 2010, his unit received some degree of training from American special forces units.

“He was a perfect soldier from his first days, and everyone knew he was a star,” an unnamed former comrade who is still active in the Georgian military told McClatchy DC. “We were well trained by American special forces units, and he was the star pupil.”

“We trained him well, and we had lots of help from America,” another anonymous Georgian defense official told McClatchy about Shishani. “In fact, the only reason he didn’t go to Iraq to fight alongside America was that we needed his skills here in Georgia.”

In 2008, when Russia and Georgia briefly went to war over the Georgian breakaway province of South Ossetia, Shishani reportedly was a star soldier. Although Russia quickly won the war, Shishani and his special forces unit caused asymmetrical damage to the invading Russian forces, including the wounding of the Russian commander of the 58th Army.

Shishani ultimately fell out of favor with the Georgian military and was arrested for 15 months for illegally harboring weapons. In 2012, after serving his sentence, Shishani fled Georgia and went to Syria via Turkey.

However, his history of asymmetrical fighting against the Russians in the Caucasus, both before and after having received American training, has played a key role in defining Shishani’s military and command style.

“Shishani is somewhat unique among ISIS’s commanders. Shishani is fighting like an insurgent,” Daveed Gartenstein-Ross, a senior fellow at the Foundation for Defense of Democracies, told Musings on Iraq. “He’s using a complex style in Anbar [province in western Iraq], relying on a very small force … Shishani’s forces emphasize speed and agility.”

“They’ll hit multiple targets on the same day, and engage in harassing attacks to try to draw out the enemy, the Iraqi Security Forces or the Sahwa [Sunni tribes aligned against ISIS in Iraq]. Then he loves trapping the people he’s able to draw out that are in pursuit of him.”