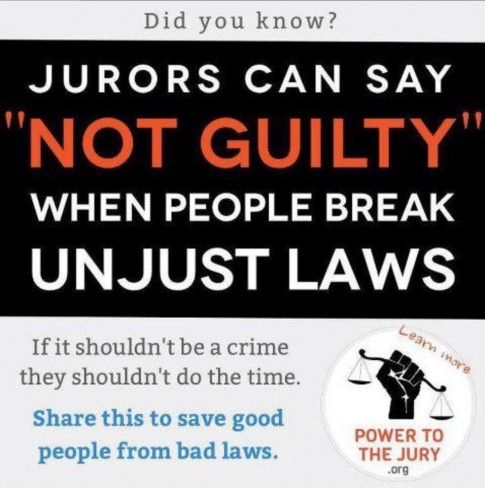 Most of you will be familiar with the concept of jury nullification. Unfortunately, the vast majority of Americans are not. This is precisely why Mark Iannicelli set up a “Jury Info” booth outside the Lindsay-Flanigan Courthouse in Denver. In a nutshell, jury nullification is the idea that jurors can “can ignore the law and follow their conscience when they believe the law would dictate a miscarriage of justice.” In other words, jurors have the right to judge the law as well as the facts. As you will see in the video at the end, this concept has centuries of precedence in these United States behind it.

When you recognize the vast power that such a concept holds, you recognize why it would be so hated by statists and authoritarians across the land. That is precisely why Mr. Iannicelli was arrested and charged with handing out information.

For a little background, read the following from the Denver Post:

Denver prosecutors have charged a man with seven counts of jury tampering after they say he tried to influence jurors by passing out literature on jury nullification on Monday.

Mark Iannicelli, 56, set up a small booth with a sign that said “Juror Info” in front of the city’s Lindsay-Flanigan Courthouse courthouse, prosecutors say.

Jury nullification is when jurors believe a defendant is guilty of the charges but reject the law and return a not guilty verdict.

In response to what appears to be a clear attack on freedom of speech, the Denver Posteditorial board published an admirable defense of Mr. Iannicelli several weeks after his arrest. Here are a few excerpts:

It is astonishing that Denver police would arrest someone for handing out political literature outside a courthouse.

It’s even more astonishing that prosecutors would charge that person with seven felony counts of jury tampering.

Now, fortunately,  civil rights attorney David Lane has filed a lawsuit in federal court on behalf of other jury nullification activists. They want an injunction to stop the city from violating their First Amendment rights should they too wish to pass out literature.

They deserve to get one.

Jury nullification is understandably controversial — and is especially resented by courts and prosecutors. It is the notion that jurors can ignore the law and follow their conscience when they believe the law would dictate a miscarriage of justice. But it is hardly a new concept.

In the 19th century, Northern juries refused to convict abolitionists for harboring runaway slaves. In the 20th century, juries often balked at enforcing Prohibition and later, on occasion, at what they considered overly harsh drug laws or laws governing sexual behavior.

Jury nullification had a darker strain, too, as Southern juries would sometimes refuse to convict white defendants guilty of racial violence.

The point is that jury nullification is not some crank theory concocted out of the blue.

As First Amendment scholar Eugene Volokh has written, “It’s clear that it’s not a crime for jurors to refuse to convict even when the jury instructions seem to call for a guilty verdict.”

Those who believe the public needs to know about this possibility should have every right to publicize their views — even outside a courthouse.

Their jury nullification literature, as it happens, merely offered general statements, such as, “Juror nullification is your right to refuse to enforce bad laws and bad prosecutions.”

Four years ago, prosecutors in New York City charged a retired chemistry professor with jury tampering after he stood outside a federal courthouse handing out information on jury nullification. But Judge Kimba M. Wood of federal district court wouldn’t buy it. She ruled that prosecutors needed to show the protester meant to influence jurors in a specific case, and dismissed all charges.

Denver officials should be held to no less of a standard.

So where do things stand now?

The good news is that Denver’s city attorney has come to the aid of the activists, setting up a fight between him and the district attorney. Once again, from the Denver Post:

Denver’s city attorney has directed the police and sheriff’s department to stop arresting people passing out jury nullification literature in front of the courthouse.

The order was revealed Friday in U.S. District Court during a hearing involving a lawsuit against the city and Denver police chief Robert White.

The lawsuit was filed earlier this month on behalf of activists who want to distribute jury nullification information outside the Lindsey-Flanigan courthouse. They sued after two others who were handing out pamphlets were  charged with seven counts of jury tampering by District Attorney Mitch Morrissey.

The lawsuit argues that the arrests are a violation of free speech rights and asks for a federal injunction against further arrests.

The city attorney’s office also has taken a position that their actions do not violate state law.

“We agree that the court house steps are a public forum and that people can pass out information, including pamphlets, in accordance with the First Amendment,” the city attorney said.

If you want a little more info on jury nullification, check out the following video featuring a much younger Ron Paul: