Back in July, after a dramatic unwind in the half dozen or so backdoor margin lending channels that had helped drive Chinese stocks to nosebleed levels triggered a terrifying 30% decline (vaporizing billions in paper profits in the process), the Politburo predictably stepped in to rescue the market.

However, when it started to become clear that a succession of declarations, directives, policy rate cuts, and even threats weren’t going to be enough to alleviate the pressure on equities, Beijing looked to take back the narrative by banning the use of certain undesirable phrases. 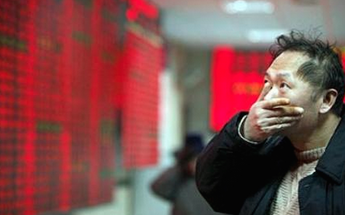 Here’s what happened (as detailed in “China Bans Use Of Terms ‘Equity Disaster’ And ‘Rescue The Market’“):

Although it’s not possible to know exactly what the mood is among Party officials in China regarding the inexorable slide in stock prices that’s unfolded over the course of the last three weeks, it’s reasonable to assume that at least some officials in Beijing are in the throes of Politburo panic after watching some $3 trillion in market value disappear into thin (and probably polluted) air.

Amid the turmoil, China has resorted to an eye-watering array of policy maneuvers, pronouncements, and plunge protection schemes aimed at arresting the slide.

Not suspending compulsory liquidation for unmet margin calls, not billions in committed market support from brokerages, not a PBoC backstop for the CFSC, and not even a ban on selling by the Social Security Council.

And so, with every attempt to manipulate the market higher falling flat in the face of selling pressure from the hairdresser/ farmer/ banana vendor day trading crowd (which has now thrown in the towel on the whole “it’s easier than farm work” theory and now just wants to break even and head for the hills) the only thing left for China to do is “fix” the narrative.

In other words, when banning selling doesn’t work, the logical next step is to ban talking about selling. As FT reports, one domestic journalist, who did not want to be named, said the government had banned local media from using the terms ‘equity disaster’ and ‘rescue the market’ in their reports on the stock market.”

Given the above it shouldn’t come as a surprise that after Chinese stocks collapsed overnight, Beijing has reportedly banned discussion and forbade “negative market reports.”

So with the censorship machine in high gear, Xi Jinping had better hope that Beijing can at least still exert some control over the narrative because as we saw over the weekend when angry investors captured the head of Fanya Metals Exchange, and as is clear from the outcry surrounding the chemical blast in Tianjin, the public is restless, and the collapse of the stock market might just be the catalyst for social upheaval.