Chinese media are describing tonight’s market action as “Judgment Day” for China, as SCMP’s George Chen explains, the crusade of ‘malicious short sellers’ against the Communist central planners and their ‘funds’ is in full swing. The “manage-the-economy-by-technical-analysis” strategy appears to have failed as Shanghai Composite has broken notably below its 200-day moving average – which six times before has been defended aggressively. Chinese Stocks are back at 7-week lows, just off the crash lows in July.

The big showdown – can the 200DMA be defended… or more crucially, the July lows!! 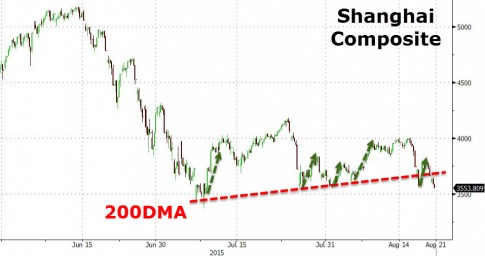 Chinese media describe today as another “Judgement Day” as short-sellers fight back against Communist funds amid futures delivery deadline!

If you believe in the power of Communist Party, now it’s time to buy as key index falls below 3600s “policy bottom” again? Rebound later?