Physical gold and silver protect nicely against a crashing currency.

And the people in Kazakhstan, who think they are protected by having their money in dollar accounts, will one day be wiped out.

On Tuesday we remarked on the increasingly perilous plight of yet another country whose economy has come under increased pressure from plunging oil prices and China’s move to devalue the yuan: Kazakhstan.

Just one day after allowing the tenge to fall sharply in the interbank market and no longer able to take the pain from falling crude prices, the country moved to a free float for the tenge overnight, causing the currency to plunge by a quarter. 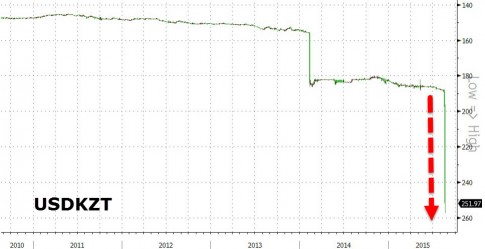 The move is clearly a desperate attempt to preserve export competitiveness in the face of a falling rouble and a devalued yuan. This is the third time the country’s central bank has devalued the currency since 1999 – the last time was in February of 2014.

Although central bank governor Kairat Kelimbetov put on a brave face and very rationally explained that “this is not a devaluation, this is a transition to a freely floating rate when the market itself determines a balanced exchange rate on the basis of demand and offer,” it’s quite clear that the situation for the country’s exporters had become dire and bringing the tenge more inline with moves seen in the currencies of China and Russia (Kazakhstan’s top trading partners) was probably long overdue. Here’s Bloomberg:

The central Asian nation, which counts Russia and China as its top trading partners, said it was switching to a free float, triggering a 23 percent slide in the tenge to a record 257.21 per dollar. Following the shock yuan devaluation last week, a gauge of 20 developing-nation exchange rates capped its longest slump since 2000, and losses continued this week as Vietnam devalued the dong and currencies from Russia to Turkey fell at least 3 percent.

Kazakhstan is central Asia’s biggest crude exporter and the country’s raw material producers have suffered since Russia stopped managing the ruble last November. In addition to the 55 percent slide in oil in the past year, the yuan move elevated pressure on the nation’s peg by forcing countries that rely on Russia and China for trade to seek ways to stay competitive.

The ruble has slumped 46 percent in the past 12 months, versus a 7.6 percent weakening for the tenge before today’s switch. Kazakh business association Atameken and the chief executive officer of ArcelorMittal’s local unit were among business leaders complaining that the price differential had diminished the competitiveness of locally made products from steel to grains and coal.

The “move follows a huge loss of competitiveness, as key trade partner Russia has allowed the ruble to depreciate significantly as commodity prices slumped,” Tom Levinson, the chief foreign-exchange and rates strategist at Sberbank CIB in Moscow, said by e-mail. The yuan’s depreciation “may be an additional factor,” he said. 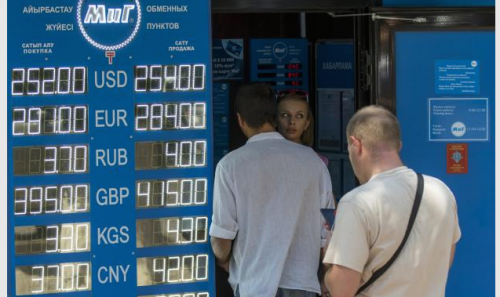 Yes, it very well “may be an additional factor” and the longer the crude plunge persists the more pressure they’ll be although as Citi notes, the move may have overshot depending on how you look at it. “REER-based analysis implies only about a 15% depreciation to 226, although a return to a more ‘fair’ value against the RUB necessitates a larger move to around 267,” the bank’s FX strategists say. 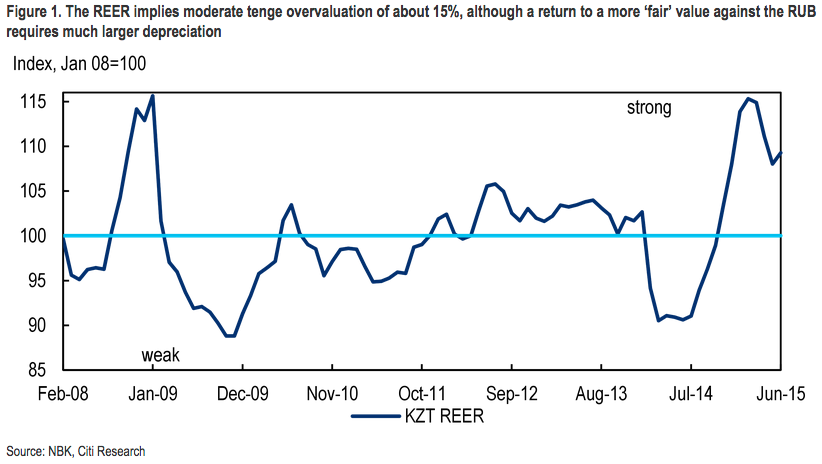 So the race to the bottom is on, the only question now is what other hard-hit countries already suffering from the global commodities slump and the threat that the Fed might one day stop bluffing will China’s FX bombshell push over the edge in the weeks and months ahead.

Kazakshtan has taken a bolder approach to currency determination by fully scrapping the existing currency band. Earlier In July the central bank had widened the currency corridor of the USDKZT to 170-198 from 170-188. The USDKZT fell to 254 in early trading.

The move breaks the more statist approach to currency determination, although it is consistent with the broader strategy of allowing more currency flexibility against the backdrop of slumping commodity prices

In May the National Bank of Kazakhstan had announced its intention to gradually loosen its grip on the tenge and move to inflation targeting in order to better address adverse global macroeconomic shocks, including slower growth in key trading partners and less favorable commodity prices. More recently, China currency devaluation and the renewed downward pressure on oil prices may have served as the trigger behind the current move to allow the tenge to depreciate further in our view.

With the continued selloff in oil, the KZT will likely remain under pressure in the near future. Moreover, the FX could also suffer from the likely new round of dollarization after the shift. All of this, we think could push the KZT weaker than our projected KZT250/$ level in the near future. Moreover, after several rounds of dollarization in the past few years, we think that the potential for further local FX demand will likely be limited, as a much weaker KZT could start to trigger the reversal of FX positions. Therefore, we think that with a strong one-off move today, a large part of KZT weakness could already be priced in.

In our view, the move of Kazakh authorities towards weaker tenge was in part expected by the market given both February 2014 20% depreciation did not account for the decline in oil prices over 2H14 and 2015, while the widening of the exchange rate band in July 2015 did not provide enough space to accommodate the pressures. At the same time, earlier this year the authorities declared a possibility for further exchange rate depreciation in case oil prices declined to the levels below USD50/bbl.

The move towards inflation targeting is likely to support the country’s production activity with its non-oil export segment heavily relying on the Russian market, therefore it may prop up the growth in the country and help fiscal sector to accommodate external pressures in case they continue to mount (Kazakh President Nursultan Nazarbaev stated yesterday that the country should be prepared for USD30-40/bbl). Given the more flexible approach to the exchange rate and our base case scenario of oil prices reaching the level of USD62/bbl by the end of the year, we revise our 2015 year end forecast form KZT/USD213 to KZT/USD225.