Who would have thought.

A German company, airport operator FRAPORT won the bid to operate and maintain 14 regional airports, considered to be top of the top in Greece. With an offer of 1.23 billion euro, the consortium of Fraport-Slentel (a unit of Greek energy group Copelouzos) won the bid to lease the regional airports for 40+10 years. Among the 14 regional airports are those on most popular tourist Greek islands like Mykonos, Rhodes, Kos, Santorini and Corfu. It is the first privatization deal under SYRIZA-ANEL coalition government and the biggest privatization deal in Greece since beginning of the crisis and the bailout programs in 2010.

Total €1.23 billion for the whole period of lease

Annual rent of €22.9 million per year

25% of the before tax, interest, revenues amortization and fees for Civil Aviation Authority

Pledge to invest €330 million to upgrade the airports in the first four years and a total of €1.4 billion for the next four decades. (source)

Already in November 2014, Greece’s privatization company Hellenic Republic Asset Development Fund (HRADF) had declared Fraport-Slentel Consortium as the “preferred bidder” stating that its offer was “significantly higher” than the second best bid. The offers for the tender were submitted in October 2014.

According to HRADF statement, consultants for the tender were : “Citigroup Global Markets Limited and Eurobank EFG Equities Investment Firm S.A. as financial advisors, Your Legal Partners and  Drakopoulous & Vasalakis Law firm as legal advisors and Lufthansa consulting, Doksiadis Associates and Alanna Consulting Group, as technical advisors to assist with the privatisation.”

What is highly interesting is that Lufthansa is also shareholder in Fraport at 8.45%. In Fraport official site, the shareholder structure is given as:

On August 13th the deal was sealed by the Greek government, yesterday, Monday, the decision was published in Greece’s official Gazette.

The 14 airports are divided into two groups:

Group A: the airports in Thessaloniki, Corfu, Chania, Kefalonia, Zakynthos, Aktion and Kavala

Group B: the airports on Rhodes, Kos, Samos, Lesvos, Mykonos, Santorini and Skiathos.

The privatization deal will upgrade the airports in Greece’s most favorite tourist destinations improving the first image of the country to the million of tourists flocking each and every year. According to the UN World Tourism Organization (UNWTO), the number of international tourists visiting Greece grew by 17 percent in the first half of 2014.  This continues the strong performance of last year when Greece welcomed some 18 million international tourists.

But just 330 million euro in investment for 14 airports in the next four years? This is €82,500,000 per year, and €5,892,857.1429 per airport each year. OK, jobs will be created and really miserable airports like the International Airport on Kos will improve their services and capacities.

Now, some mean Greeks claim that the investment will be assisted with European Funds (ESPA) and some others – equally mean – wonder whether the new lessee will pay Value Added Tax to the Greek state and do not act like the German Hochtief that has been refusing to pay V.A.T. for handling Athens International Airport ‘Eleftherios Venizelos’ for more than 20 years.

Some other Greeks realized that in all three consortium bidders were also the famous and powerful Greek businessmen, also known as “national contractors” for having secured contracts with the Greek state for building roads, bridges, and whatever Greece wanted to build and construct in order to modernize the country in the last decades, including energy, natural gas, sewage, just to name  additional few.

PS if you’re an investor interested in Greek assets here are the running tenders of HRADF for ports, trains and whatever else your soul wishes.

For those curious who sits on the Fraport Supervisory and Advisory board, here is the answer: 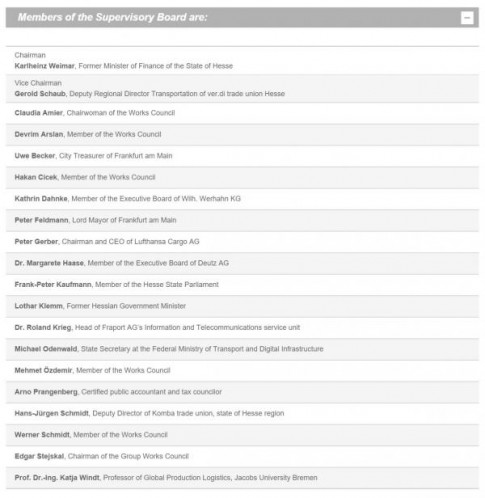 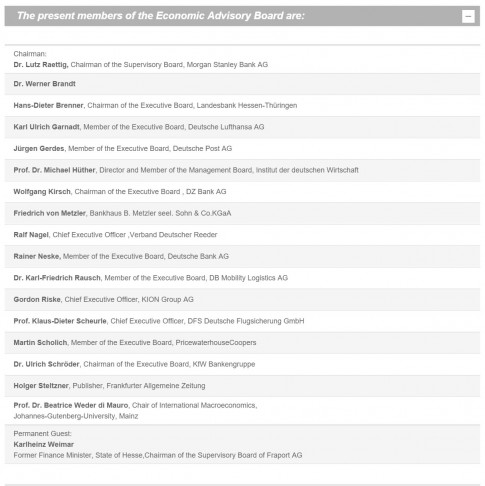