It appears that carry trades are not the only thing blowing up in China. A massive explosion, fireball, and mushroom cloud can be seen at chemical storage facility in the Chinese port town of Tianjin…

The explosion could be seen from space… 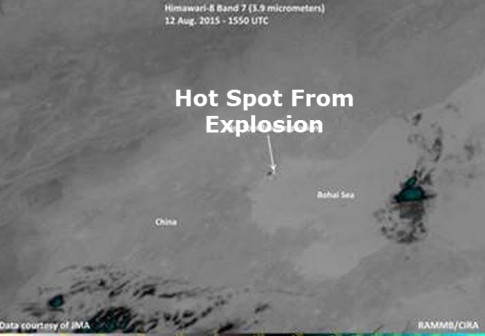 Series of explosions in Tianjin, northern China, caused a huge mushroom cloud and triggered shockwaves that could be felt miles away

Reportedly caused by flammable cargo, videos from the scene show a dramatic fireball exploding near the site of a fire.

The official Xinhua news agency said the blast happened at around 11:30 pm (1630 GMT), when a deafening bang was heard as plumes of flame lit up the sky, scattering dust dozens of metres into the air.

It is still unclear what buildings and how many people were affected by the explosion, but one man filming was blown off his feet by the force.

Tianjin is a major port and industrial area to the south-east of the Chinese capital, Beijing