– “We Have A Civil War”: Inside Turkey’s Descent Into Political, Social, And Economic Chaos

Visit the link above if you have missed my commentary on Turkey.

Just as the Ferguson night turned violent, again, and at least two people were struck by gunfire during the latest riot to “commemorate” the death of Michael Brown, reports of violence came from another part in the world, Turkey where moments ago CNN Turk reported that two attackers, a man and a woman, opened fire on the U.S. consulate building in Turkey’s biggest city, Istanbul, on Monday and fled when police shot back. 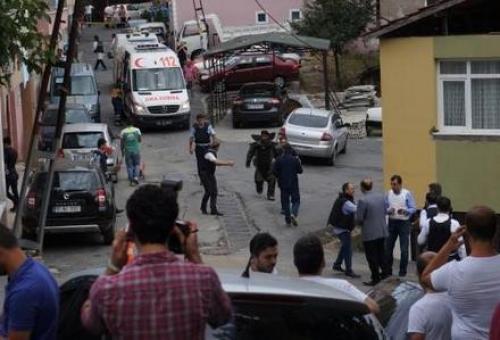 The Cihan news agency said those involved in the attack on the building in Istanbul’s Sariyer district included one man and one woman.  CNN Turk said there were no casualties.

A gun attack targeted the US Consulate in Istanbul leading to an exchange of fire between assailants and security personnel, according to local media reports.

The reports said that one attacker was male and the other one was female, adding that the police was searching for the suspects.

Turkey has been in a heightened state of alert since it launched what officials described as a “synchronized war on terror” last month, including air strikes against Islamic State fighters in Syria and Kurdish militants in northern Iraq, and the detention of hundreds of suspects at home.

U.S. diplomatic missions have been targeted in Turkey in the past.

The far-leftist Revolutionary People’s Liberation Army-Front (DHKP-C), whose members are among those detained in recent weeks, claimed responsibility for a suicide bombing at the U.S. embassy in Ankara in 2013 which killed a Turkish security guard.

This follows more local violence when a bomb attack at an Istanbul police station early on Monday morning killed three people and injured at least 10, the Dogan news agency said on Monday. Istanbul police headquarters confirmed in a statement that three police officers and seven civilians were wounded in the blast, but gave no death toll. 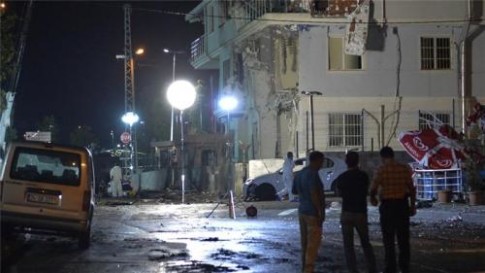 The attack targeted the police station in Istanbul’s Sultanbeyli neighbourhood early on Monday morning and caused a fire that collapsed part of the three-storey building, the agency reported. The explosion also damaged neighbouring buildings and around 20 cars parked nearby, the private Dogan news agency reported.

One of the police officers injured in the explosion is reportedly in critical condition.

Al Jazeera’s Bernard Smith, reporting from Istanbul, said the blast struck at about 1am local time on Monday morning. “The neighbourhood is right on the outside edge of Istanbul in what could be called a ‘conservative’ area, way away from the central part of the city,” he said.

He said that there was no immediate claim for the attack, which comes at a time of a sharp spike in violence between Turkey’s security forces and fighters from the Kurdistan Workers’ Party, or PKK.

The attacks also come at a time when Turkey is taking a more active role against Islamic State of Iraq and the Levant (ISIL) fighters.

In fact, as described in detail in “We Have A Civil War”: Inside Turkey’s Descent Into Political, Social, And Economic Chaos, things in the country located at the nexus between Europe and Asia are about to get a whole lot worse:

Deflecting criticism surrounding Ankara’s anti-terror air campaign, Turkey’s foreign minister Mevlut Cavusoglu last week told state television that strikes against ISIS targets would pick up once the US had its resources in place at Incirlik which will supposedly serve as a hub for a new “comprehensive battle.”

As of yesterday, the next phase in Turkey’s NATO-blessed war against the PKK ISIS is about to unfold when yesterday six F-16 jets and about 300 personnel arrived in Incirlik Air Base in Turkey, the U.S. military said, after Ankara agreed last month to allow American planes to launch air strikes against Islamic State militants from there.

Prepare for much more violence, both real and false flagged, out of Turkey as the “war of Syrian invasion and Qatari gas pipeline liberation” unwinds with increasingly faster speed.