I came across this photo: 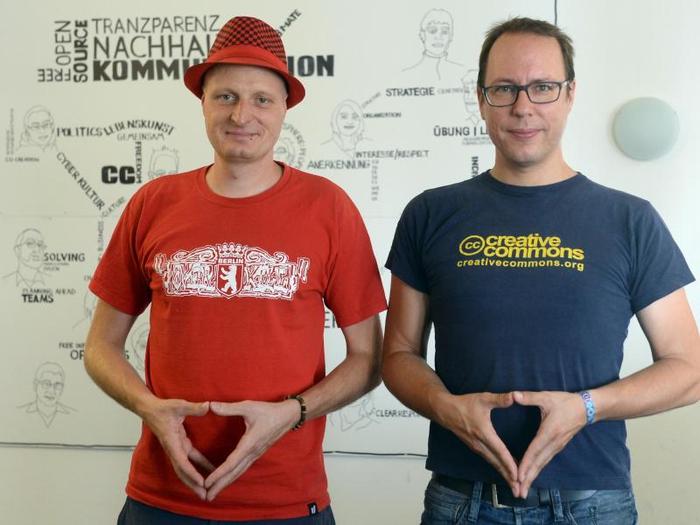 – Germany halts treason inquiry into journalists after protests (The Guardian–Jul 31, 2015):

A treason investigation into two journalists who reported that the German state planned to increase online surveillance has been suspended by the country’s prosecutor general following protests by leading voices across politics and media.

Harald Range, Germany’s prosecutor general, said on Friday he was halting the investigation “for the good of press and media freedom”. It was the first time in more than half a century that journalists in Germany had faced charges of treason.

Speaking to the Frankfurter Allgemeine Zeitung, Range said he would await the results of an internal investigation into whether the journalists from the news platform netzpolitik.org had quoted from a classified intelligence report before deciding how to proceed.

His announcement followed a deluge of criticism and accusations that Germany’s prosecutor had “misplaced priorities”, having failed to investigate with any conviction the NSA spying scandal revealed by whistleblower Edward Snowden, and targeting instead the two investigative journalists, Markus Beckedahl and Andre Meister.

In a scathing attack, the leading Green MP Renate Künast, who is also chair of the Bundestag’s legal affairs committee, called the investigation a “humiliation to the rule of law”. She accused Range of disproportionately targeting the two journalists, whilse ignoring the “massive spying and eavesdropping [conducted] by the NSA in Germany”.

Künast told the Kölner Stadt-Anzeiger: “Nothing happened with that. If it wasn’t for investigative journalism, we would know nothing.”

Wolfgang Kubicki, of the pro-business FDP party, also said he found it “disconcerting” that Range had ignored the NSA allegations while choosing to pursue the journalists. “Instead of intimidating journalists, the state prosecutor should resume the investigation proceedings into the NSA affair that he only recently abandoned,” he said.

But Jens Koeppen, head of the Bundestag committee Digital Agenda, and a member of the leading CDU party, said it was right to condemn the journalists. “If something is classified as confidential, that also applies to journalists, as well as would-bes,” he wrote on Twitter, referring to the fact that Netzpolitik.org is not a traditional newspaper.

In articles that appeared on netzpolitik.org in February and April, the two reporters made reference to what is believed to be a genuine intelligence report that had been classified as confidential, which proposed establishing a new intelligence department to monitor the internet, in particular social media networks.

The federal prosecutor’s investigation was triggered by a complaint made by Germany’s domestic intelligence agency, the Office for the Protection of the Constitution (BfV) over the articles, which it said had been based on leaked documents.

Beckedahl hit out at the prosecutor’s investigation against him on Friday on the state broadcaster Deutschlandfunk, calling it “absurd” and suggesting it was meant as a general warning to scare sources from speaking to journalists.

Much of the German media called the decision an attack on the freedom of the press. The news platform, which is financed by voluntary donations, was reported to have received thousands of euros as a sign of support.

In a statement, netzpolitik.org said the charges against its journalists and a source had been “politically motivated and targeted to crush the vital public debate about internet surveillance post-Snowden”.

It added: “Whistleblowers acting in the public interest need protection, not prosecution as traitors.” netzpolitik.org said that next week it was due to receive an award for its innovative and distinct journalism from the German government and industry, and said: “We will not allow ourselves to be intimidated by the investigations and we will continue our critical and independent journalism – including with original documents.”

In an act of solidarity, the research website Correctiv reported itself to the general prosecutor’s office on Friday, saying that it too was “guilty of treason”, at the same time as republishing the controversial documents originally published by netzpolitik.org.

“They should be investigating the whole lot of us!” said Correctiv’s editor-in-chief, Markus Grill. Meanwhile, German lawyers called for the abolition of the offence “journalistic treason”.

The president of the German Association of Lawyers, Ulrich Schellenberg, was reported by FAZ as saying there was a “fundamental public interest” in understanding the work of secret services, and therefore it was necessary to stop the “state proceeding against a critical journalism”.