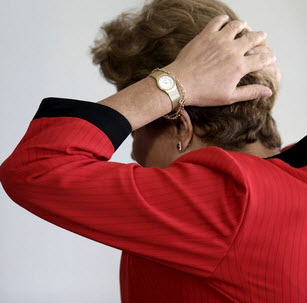 With the economy imploding, currency collapsing, and credit risk soaring, it is perhaps no surprise that just under a year since she was re-elected, Brazil’s President Dilma Rousseff is now Brazil’s most unpopular democratically elected president since a military dictatorship ended in 1985, with an approval rating of just 8%. In a recent poll, 71% said they disapprove of the way Rousseff is doing her job… and two-thirds would like to see her impeached.

Via The Digital Journal,

Dilma Rousseff is now Brazil’s most unpopular democratically elected president since a military dictatorship ended in 1985, says a poll out Thursday that put her approval rating at eight percent.

Seventy-one percent of those questioned in the Datafolha survey said they disapprove of the way Rousseff is doing her job, up six points since June. Her approval rating is down from 10 percent.

Her numbers are worse than those of Fernando Collor de Mello, who resigned in 1992 over corruption allegations. Right before he stepped down he had an approval rating of nine percent and disapproval of 68 percent.

“Dilma has thus become the president with the worst approval rating among all those elected directly since the return of democracy,” said the web site of the newspaper Folha de Sao Paulo, which belongs to the same group as Datafolha.

Datafolha began conducting national polls during the rule of Collor. In 1990 he became the first democratically elected president since the end of the military regime.

His predecessor, Jose Sarney, took power in 1985 as vice president under Tancredo Neves. Neves had been elected president by congress after 21 years of military rule, but died before he could assume office.

Rousseff began her second term in January after winning re-election by a thin margin, and things are already looking grim.

As we previously noted, the WSJ adds, Rousseff is facing a combination of negative factors, of which the depressionary economy is just one: “The county’s economy is expected to contract by around 1.8% this year, according to a central bank survey of private sector bank economists. Annual inflation stands at 9.25%, well above the central bank’s tolerance band of 2.5% to 6.5%. And the poor economic conditions are raising fears among Brazilians that they could lose their jobs.”

Then there is corruption:

Meanwhile, a continuing investigation surrounding state-run oil company Petróleo Brasileiro SA, or Petrobras, is also weighing on Ms. Rousseff’s approval rating, though she hasn’t been accused of any wrongdoing and has denied involvement in the scandal. Petrobras has said it is cooperating with the investigation.

Mr. da Silva, who handpicked Ms. Rousseff as his party’s candidate to succeed him, hasn’t been implicated in the Petrobras scandal.

This happened after the lower house approved in a first round vote a constitutional amendment by 445 against 16 votes granting salary increases to police chiefs, prosecutors and government attorneys. The bill still needs to pass a second round vote before going to the Senate.

Earlier, leaders of the Brazilian Labor Party and the Democratic Labor Party, or PTB and PDT, said they would act independently and no longer participate in meetings of the ruling coalition. The parties together have 44 out of 513 seats in the Chamber.

But Brazil’s biggest concern, the one from which all of its other problems stem, is China. Unless the country that was the driver of Brazil’s commodity export golden age returns to its place as Brazil’s most important trading partner, no matter what fiscal or monetary policies Brazil implements, the domestic politics, already ugly, are set to get worse.

And as everyone knows by now, China has its own spate of problems to deal with, with Brazil’s commodity export troubles far on the back burner.

Which is why expect more credit market participants to notice the depressionary developments in brazil, and as the country’s CDS continue to blow out, many will start asking themselves: is Brazil the next Argentina?