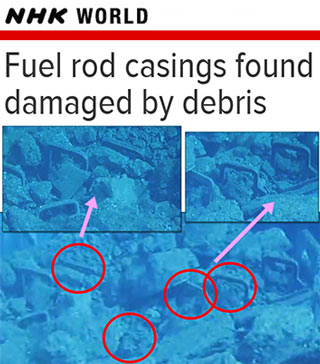 NHK, Aug 4, 2015 (emphasis added): Fuel rod casings found damaged by debris… workers have found damaged fuel rod containers after removing a device that had fallen on them during the 2011 disaster. They’re now checking whether the damage will affect their plan to remove fuel from the pool. A 20-ton device for moving fuel rods in and out of the pool on the building’s top floor was removed on Sunday… High radioactivity prevented workers from carrying out the removal smoothly… Workers found that the metal casings of 4 assemblies had been distorted and have twisted handles. This is evident in images released by the operator… The utility is checking for other damage and studying how to remove the distorted casings from the pool.

Vice News, Aug 4, 2015: A 30 year-old man died this weekend as he worked on decommissioning Japan’s Fukushima nuclear plant… It is not yet known whether the man’s death was due to radiation exposure, and an autopsy is pending… In a statement released Monday, [Tepco] said that the man had been taken to the emergency room after complaining that he wasn’t feeling well. “His death was confirmed early in the afternoon,” Tepco said. Isabelle Dublineau, the head of the experimental radiotoxicology laboratory for France’s Institute for Radiological Protection and Nuclear Safety (IRSN), said… it was “too early” to comment on the death… While the latest death has already been branded suspicious in the media, Tepco has so far denied that any of the deaths are related to radiation exposure… The worker who died over the weekend was working… on the construction of the “ice wall”…

Watch TEPCO’s video of the removal at Unit 3 here