Most notably, Varoufakis says Tsipras was “dispirited” by the “no” vote and that many in the Greek government were indeed depending on a “yes” vote to give them a way out of what seemed like an intractable situation. 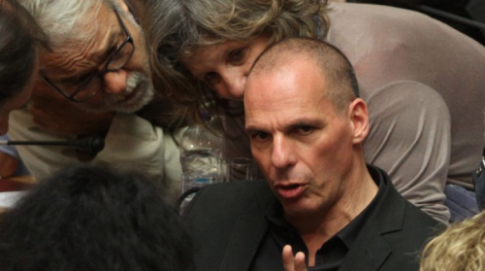 – Varoufakis Tells All: Tsipras Was “Dispirited” With “No” Vote, Referendum Was Meant As “Exit Strategy” (ZeroHedge, Aug 5, 2015):

In the wake of Greek PM Alexis Tsipras’ seemingly inexplicable decision to disregard a referendum outcome he had aggressively campaigned for on the way to accepting a deal with Athens’ creditors that looked far worse than the proposal that 62% of Greek voters indicated was unacceptable just a week prior, some began to question whether Tsipras intended to win the referendum at all.

That is, some wondered if, seeing no way out, Tsipras had secretly hoped that a “yes” vote would have given him an excuse to either accept creditors’ proposals and say he was simply doing the bidding of the Greek populace, or else simply resign in feigned disgust at his people’s willingness to accept a bad deal.

Indeed, the Telegraph’s Ambrose Evans-Pritchard reported early last month that the Greek prime minister who decisively and unexpectedly pushed for a plebiscite on the last weekend of June, “never expected to win the referendum on EMU bail-out terms, let alone to preside over a blazing national revolt against foreign control.”

Now, in an interview with Christos Tsiolkas for the Australian magazine Monthly, ex-FinMin Yanis Varoufakis tells the story of what took place in the minutes and hours after the referendum “no” vote and details what he calls “The Schaueble Plan”. Most notably, Varoufakis says Tsipras was “dispirited” by the “no” vote and that many in the Greek government were indeed depending on a “yes” vote to give them a way out of what seemed like an intractable situation.

Here are the notable excerpts from the piece:

From Greek Tragedy, by Christos Tsiolkas

Let me just describe the moment after the announcement of the result. I made a statement in the Ministry of Finance and then I proceeded to the prime minister’s offices, the Maximos [also the official residency of the Greek prime minister], to meet with Aleksis Tsipras and the rest of the ministry. I was elated. That resounding no, unexpected, it was like a ray of light that pierced a very deep, thick darkness. I was walking to the offices, buoyed and lighthearted, carrying with me that incredible energy of the people outside. They had overcome fear, and with their overcoming of fear it was like I was floating on air. But the moment I entered the Maximos this whole sensation simply vanished. It was also an electric atmosphere in there, but a negatively charged one. It was like the leadership had been left behind by the people. And the sensation I got was one of terror: What do we do now?

I could tell [Tsipras] was dispirited. It was a major victory, one that I believe he actually savoured, deep down, but one he couldn’t handle. He knew that the cabinet couldn’t handle it. It was clear that there were elements in the government putting pressure on him. Already, within hours, he had been pressured by major figures in the government, effectively to turn the no into a yes, to capitulate.

[There were people in the government] who were counting on the referendum as an exit strategy, not as a fighting strategy.

When I realised that, I put to him that he had a very clear choice: to use the 61.5% no vote as an energising force, or [to] capitulate. And I said to him, before he had a chance to answer, ‘If you do the latter, I will clear out. I will resign if you choose the strategy of giving in. I will not undermine you, but I will steal into the night.’

Tsipras looked at me and said, ‘You realise that they will never give an agreement to you and me. They want to be rid of us.’

And then he told me the truth, that there were other members of the government pushing him into the direction of capitulation. He was clearly depressed.

I answered him, ‘You do the best with the choice that you’ve made, one that I disagree with wholeheartedly, but I am not here to undermine you.’

So then I went home. It was 4.30 in the morning. I was distraught – not personally, I don’t give a damn about moving out of the ministry; it was actually a great relief. I had to sit down between 4.30 and 9 in the morning and script the precise wording of my resignation because I wanted on one hand that it was supportive of Aleksis and not undermining him but on the other hand [to] make clear why I was leaving, that I was not abandoning ship. The ship itself had abandoned the course.”

The German finance minister, Wolfgang Schäuble [had a plan].  I called it the Schäuble plan. He has been planning a Greek exit as part of his plan for reconstructing the eurozone. This is no theory. The reason why I am saying it is because he told me so.

This is Schäuble’s way of exacting concessions from France and Italy, that was what the game always was. The game was between Germany, France and Italy, and Greece was – not so much a scapegoat – we have an expression in Greece.

It is a clear strategy for influencing from Paris and from Rome,particularly from Paris, the kind of concessions towards creating a disciplinarian, Teutonic model of the eurozone.