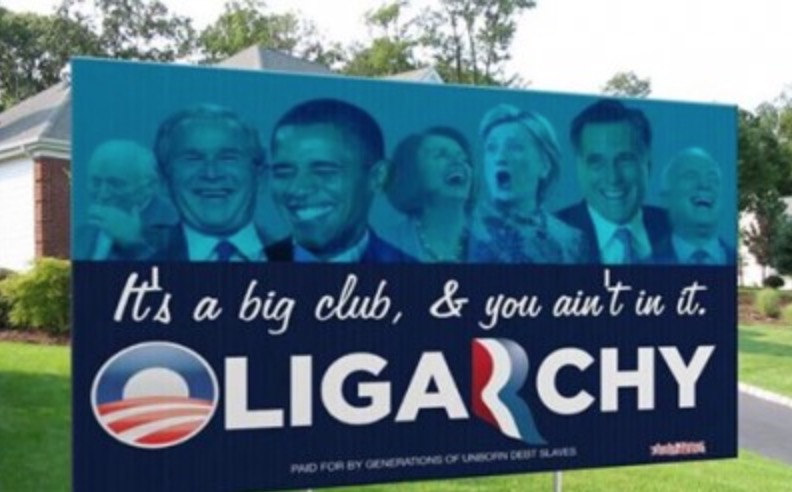 Ever since I started this website in 2012, one of my primary objectives was to convince readers that the American system of government is nothing like what we are told in school and via the oligarch-owned mainstream media. That the country has become so captured and corrupted by sociopathic oligarchs, that a neo-feudal modern serfdom was emerging where the opportunities to enjoy rising standards of living for the vast majority of people was rapidly becoming a pipe dream.

Despite the seemingly strong empirical support in previous studies for theories of majoritarian democracy, our analyses suggest that majorities of the American public actually have little influence over the policies our government adopts. Americans do enjoy many features central to democratic governance, such as regular elections, freedom of speech and association, and a widespread (if still contested) franchise. But we believe that if policymaking is dominated by powerful business organizations and a small number of affluent Americans, then America’s claims to being a democratic society are seriously threatened.

Ever since that study came out, I’ve noticed more and more people publicly admitting that the U.S. in nothing more than an oligarchy. Even former U.S. President Jimmy Carter said it last week.

Meanwhile, just today, I came across the latest shocking proof of how bought and paid for “our” political system really is. We find out from the New York Times, that only 400 families account for nearly half of all spending on the 2016 Presidential election so far. The Dark Ages almost look democratic by comparison.

From the NY Times:

Fewer than four hundred families are responsible for almost half the money raised in the 2016 presidential campaign, a concentration of political donors that is unprecedented in the modern era.

The vast majority of the $388 million backing presidential candidates this year is being channeled to groups that can accept unlimited contributions in support of candidates from almost any source. The speed with which such “super PACs” can raise money — sometimes bringing in tens of millions of dollars from a few businesses or individuals in a matter of days — has allowed them to build enormous campaign war chests in a fraction of the time that it would take the candidates, who are restricted in how much they can accept from a single donor.

A New York Times analysis of Federal Election Commission reports and Internal Revenue Service records shows that the fund-raising arms race has made most of the presidential hopefuls deeply dependent on a small pool of the richest Americans.

To peruse the top donors in presidential politics is to take a cross section of the wealthiest 1 percent of Americans. At least 67 are billionaires or married to one, according to Forbes.

“In the donor world, it is primarily a love of economic freedom,” said Chart Westcott, a Dallas private equity investor who has contributed $200,000 to Unintimidated PAC, a group backing Gov. Scott Walker of Wisconsin. “That’s the biggest drive for most donors — more prosperity for the country as a whole, as well as for themselves.”

“More prosperity for the country as a whole…”

Really? Where is this widespread prosperity, at the end of the rainbow in a leprechaun’s hat?

Senator Ted Cruz of Texas, a favorite of the Tea Party movement, has raised the most cash from the fewest donors. A collection of super PACs supporting Mr. Cruz raised $37 million, nearly all of it from three families. Robert Mercer, a deeply private hedge fund investor from New York, contributed $11 million, making him the top known political donor in the country so far this election cycle.

Ted Cruz knows how to say the right things, but he knows where his bread is buttered.

But millions of dollars also came from corporate entities with no clear link to a known individual or business: One million-dollar donor to the pro-Bush super PAC is Jasper Reserves, a limited liability corporation established two years ago in West Virginia, where records provided few clues about its owners.

Mr. Braman has previously subsidized Mr. Rubio’s salary, and employed his wife. Mr. Fernandez, who became a billionaire after building several health care companies, emailed with Mr. Bush often when he was governor of Florida to ask about doing business with the state, Mr. Bush’s emails show.

The largest single donation to America Leads, a group supporting Gov. Chris Christie of New Jersey, came from a Boston investor seeking to build a $4 billion casino resort there. At least five donors to Mr. Walker’s super PAC are companies that received hundreds of thousands of dollars in aid from Wisconsin’s economic development agency, according to state records.