“It may come to a military coup.”

That rather ominous assessment of the political situation in Ukraine comes courtesy of a Right Sector fighter who spoke to FT last week.

Like Saint Mary (the militia which recently pledged to create a “Christian Taliban” and insists that “Moscow must burn”), The Right Sector is one of the many volunteer battalions fighting to rout the Russian-backed separatists operating in eastern Ukraine.

As discussed here on Sunday by Justin Raimondo, “the Right Sector and allied far-rightist militias are the core of [Kiev’s] military operation against the east. Right Sector provided the muscle of the Maidan revolution, standing in the front lines against the widely feared Berkut special forces loyal to Yanukovych. If these thugs must be reined in, then the success of the ‘anti-terrorist’ campaign is doubtful: yet Kiev is increasingly unwilling to pay the high price of appeasing their increasingly troublesome Praetorians.”

To let FT tell it, these “troublesome Praetorians” may be set to overthrow the government in what Right Sector leader Dmytro Yarosh calls a “new phase of the Ukrainian revolution.”

The problem, as the battalion leaders see it, is that the revolution simply didn’t usher in much change, and that’s primary due to the fact that all of the “patriots” got sidetracked by defending the country from a Kremlin-assisted uprising. “The (Maidan) revolution was interrupted by the aggression (in the east) and the patriots left Maidan and went to the east to protect Ukraine. Only 10 percent of people in positions of power are new; the rest are all the same, pursuing the same schemes they always did,” Serhiy Melnychuk, an MP and volunteer battalion founder recently told Reuters.

But in some ways, Melnychuk exemplifies why the volunteer militias and their agenda are so dangerous. “The Aidar Battalion has been accused by Amnesty International of committing war crimes [and its leader] member of parliament Serhiy Melnychuk has been stripped of immunity from prosecution and charged with kidnapping, issuing threats, and operating a criminal gang,” Raimondo notes.

Among the volunteer contingents, Right Sector stands out and indeed, its fighters are revered by some soldiers in the regular Ukrainian army. Here’s FT:

The troops are members of Right Sector, the far-right group that evolved from among the most militant wing of the protesters who toppled Viktor Yanukovich, the country’s pro-Russian president, in its pro-democracy revolution last year.

But fears are growing that Right Sector — the only major volunteer battalion Kiev has not yet managed to bring under regular army control — could turn its fire on the new government itself.

Dmytro Yarosh, Right Sector’s leader, called late last month for a nationwide no-confidence referendum in President Petro Poroshenko. He was addressing a rally in Kiev of up to 5,000 Right Sector activists, angry over what they say is the government’s slow progress in fighting corruption and excessive concessions to Moscow as it attempts to reach a settlement over eastern Ukraine. 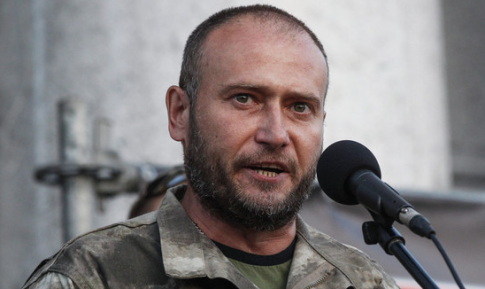 And earlier last month, two people were left dead in a shootout between off-duty Right Sector fighters and police near Ukraine’s previously peaceful western border — 1,500km away from the eastern conflict. The group claimed it was acting to destroy an illicit cross-border cigarette trade. Some observers have suggested Right Sector was actually trying to take it over.

Russian officials and media have long demonised Right Sector as neo-Nazis who, they claim, were the real driving force behind Ukraine’s revolution. Moscow media’s obsession led some Ukrainian officials to suggest privately that Right Sector might have been penetrated by Russian intelligence as a subversive “project” aimed at undermining the government.

Popular support for the group remains low, although a poll found it had risen from 1.8 per cent last October to 5.4 per cent by July.

Yet as Mr Umland notes, the bravery shown in the east Ukraine conflict by the Right Sector battalion has earned it the esteem of many regular soldiers — posing a dilemma for Kiev.

While it’s as yet unclear whether the referendum call will garner enough support to further embolden Right Sector as it ponders a military coup, it’s certainly worth noting that Ukraine appears to be headed for a similar fate as that which has befallen many a state in the wake of US-supported “deomcratic revolutions.” In short, it almost never ends well and on that note, we’ll close with the following quote from a Right Sector “instructor” who spoke to FT:

“Having lived in [western] Europe, I realise that they often confuse Nazism with nationalism, which for us Ukrainians is more akin to patriotism. It’s not about considering your own ethnic group as superior, but being proud of it, and of defending your country.”