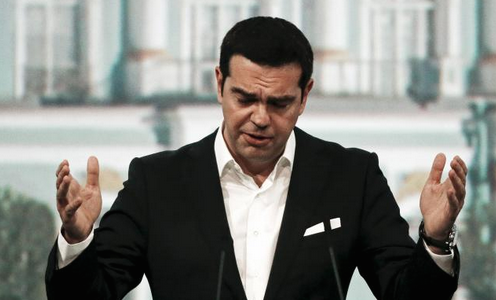 At that juncture, the opposition parties which helped PM Alexis Tsipras beat back a Syriza rebellion and pass the first two sets of bailout prior actions through parliament began to ask questions.

Essentially, opposition lawmakers wanted to know whether Tsipras was allowing his party to undermine progress on the bailout just as he was desperately courting MPs from across the aisle in order to win parliamentary approval for the deal’s conditions.

On Wednesday, in an interview with Sto Kokkino radio, Tsipras addressed friction within the party and suggested that if he lost his majority in parliament he would call for snap elections.

Today, some 200 Syriza members met at an Athens movie theatre in an effort to figure out next steps for the divided party. Essentially, the Left Platform still wants to resist the third bailout while Tsipras simply wants to avoid party politics altogether until the new program is in place at which point he’ll ‘deal’ with Syriza’s far-left rabble-rousers.

Here’s Reuters summarizing the above:

The hardline Left Platform faction is demanding that Syriza abandon talks with lenders immediately and hold an ordinary party congress to determine the party’s course. A regular congress would favor the far-left, with the same members who attended two years ago returning to vote on Syriza’s future.

Tsipras is believed to favor an emergency congress instead, which would enable him to bring in new Syriza members and capitalize on the wider public support he has secured over the past two years, making it easier to defeat the far-left camp.

A less likely course would be for the central committee to opt for a referendum, which would put an as yet undetermined question about party strategy to grassroots members for a vote.

In a radio interview on Wednesday, Tsipras said he could be forced to call an early general election if he no longer had a parliamentary majority, and suggested an emergency party congress could be held in early September.

That would potentially allow Greece to wrap up negotiations with lenders on a bailout package, which Athens hopes to have sealed before a major debt payment falls due on August 20, and secure initial funding before a vote.

“Our priority is the (bailout) deal,” Gerovasili said. “After this we can deal with party issues.”

Speaking to the central party committee on Wednesday Tsipras essentially said that ‘victory’ wasn’t an option in negotiations with creditors – it was either “compromise or default”, he said. The PM also sounded the now familiar challenge to “anyone who thinks they can do better,” daring any aspiring usurpers to “speak out”, before insisting that the Greek people’s “no” referendum vote was not a “yes” vote to a new drachma.

There was no word on plans to introduce cheese as an alternative currency.

Ultimately, Tsipras made it clear that the current situation – wherein he must depend on opposition lawmakers to pass legislation – simply isn’t tenable which means that “opposing voices must stop”.

Unfortunately, he continued, “there are no magic alternatives” and the question now is whether “Syriza can implement the deal.”

Note that his is a question we’ve been asking for sometime. Just yesterday we reiterated this concern, arguing that “there’s something very odd about leaving the implementation of an unpopular bailout program to the political party from which the staunchest opposition emanates.” To solve this problem, Tsipras has proposed an internal party ballot on Sunday if the opposition is serious in their contention that he should not have signed a deal in Brussels on July 12.

Performing extraordinary congress in September to answer how will the government and SYRIZA after the rift inside the recommended Prime Minister Alexis Tsipras in the CC of the party.

If however, the intraparty opposition insisted request for decision directly before the completion of the agreement for the new program and with the obvious intention to cancel it, Mr. Tsipras proposed a referendum among party members the next Sunday.

The prime minister threw the gauntlet to those who deny the call by sending them to come forward and say it openly today. After pointing out that “there was no alternative and the best compromise we accepted” he invited whoever believes could bring better deal, go ahead and tell her.

The significance of Tsipras’ call for a party referendum shouldn’t be overlooked.

In fact – and at the risk of overstating the case – were Syriza to vote on whether or not Greece should follow through on the agreement with creditors, the market could be in for an event that is far more dramatic and important than the original referendum.

While, as Reuters notes, the question that would ultimately be posed to Syriza party members in any potential vote is “as yet undetermined,” framing the referendum as a simple chioce between canceling the agreement with creditors or proceeding with program implementation could set up a market moving event with the potential to send everyone – Greece, the IMF, the ECB, and the EU Commission – right back to the drawing board, and plunging the country into a fresh political, social, and economic crisis.