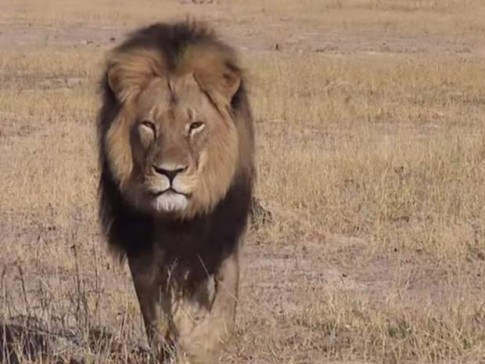 The tourist who paid thousands of pounds to kill one of Zimbabwe’s most cherished lions has been identified as an American dentist.

Authorities in Zimbabwe say Walter Palmer, from Minneapolis, paid a $55,000 (£35,000) bribe to wildlife guides to allow him to shoot the lion, named Cecil, with a crossbow.

The 13-year-old animal was found beheaded and skinned near the Hwange National Park, where he was beloved by tourists and local residents alike.

Dr Palmer, who is described as an “experienced general and cosmetic dentist” on his practice’s website, is married with two children.

His professional biography describes his enjoyment of “outdoor activities”, adding: “Anything allowing him to stay active and observe and photograph wildlife is where you will find Dr Palmer when he is not in the office.”

The dentist’s Facebook page was being inundated with angry comments and threats today as he was identified as Cecil’s killer.

“Nothing in this world would give me greater pleasure than to see your head mounted on a wall, your carcass defiled, degraded and paraded as you did to Cecil and near countless other animals,” one person wrote.

Johnny Rodrigues, chairman for Zimbabwe Conservation Task Force, identified Mr Palmer to The Independent and said anyone convicted of involvement in the illegal hunt could face up to 10 years in prison.

He added: “The head – his trophy – has been impounded and confiscated as evidence for the court in Victoria Falls”.

Mr Rodrigues had previously described Cecil as “one of the most beautiful animals to look at” and said he “never bothered anybody”.

Zimbabwe, like many African countries, is battling to curb illegal hunting and poaching threatening its endangered wildlife and conservationists fear Cecil’s death will have a knock-on effect.

The lion’s cubs could die as other male lions take his place in the pride and kill the lionesses’ offspring in to encourage them to mate.  Cecil lived in Hwange National Park, where he was well-known and loved by locals and visitors

Dr Palmer and his accomplices are believed to have lured Cecil out of the protection of the national park using bait and shot him with the bow – a silent weapon increasingly used by hunters trying to evade arrest.

But the arrow did not kill the lion immediately. Tracking data from his GPS collar linked to researchers at Oxford University showed he was followed for 40 hours before being shot dead with a rifle.

The Zimbabwe Professional Hunters and Guides Association confirmed in a Facebook post last week that the hunter in charge of the safari was one of its members and had been suspended.

“ZPHGA reiterates it will not tolerate any illegal hunting or any unethical practices by any of its members and their staff,” a statement said.

4 thoughts on “Walter Palmer: American dentist revealed as killer of Cecil the lion in Zimbabwe”