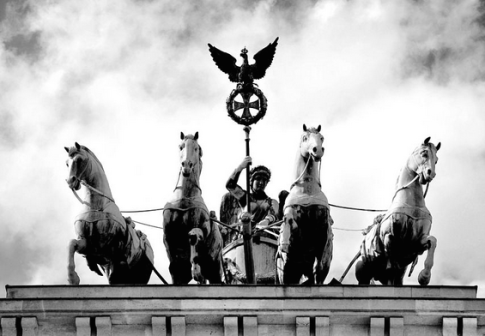 The source from the Commission also noted that the group formerly known as Troika is now being renamed as “Quadriga”, to note the inclusion of the ESM in the talks.

“Quadriga is the name inspired by Commission President, Jean-Claude Juncker for the new Greek project” the Commission source said, adding that “the EU side is a bit nervous of not knowing the IMF stance.”

We assume the reference to the IMF’s “stance” there refers to the size of the bailout and the prospects for debt relief and not to the new nickname choice, but whatever the case, here’s the definition of “quadriga” from Wikipedia:

A quadriga (Latin quadri-, four, and iugum, yoke) is a car or chariot drawn by four horses abreast (the Roman Empire’s equivalent of Ancient Greek tethrippon). It was raced in the Ancient Olympic Games and other contests. It is represented in profile as the chariot of gods and heroes on Greek vases and in bas-relief. The quadriga was adopted in ancient Roman chariot racing. Quadrigas were emblems of triumph; Victory and Fame often are depicted as the triumphant woman driving it. In classical mythology, the quadriga is the chariot of the gods; Apollo was depicted driving his quadriga across the heavens, delivering daylight and dispersing the night.

We’re not sure what’s more ironic there, the fact that an image which once appeared on Greek ceramics is now the symbol of serfdom or the fact that it’s the “chariot of the gods”, who in this case would be eurocrats and IMF officials.

As amusing – and somewhat sad – as this is, perhaps the most tragically ironic part of the entire rebranding effort is that one of the most significant representations of a quadriga the world over sits atop the Brandenburg Gate in Berlin.

Behold Greece, the new symbol of your perpetual debt slavery:

1 thought on “Goodbye Troika: Germany Rides Into Its Greek Colony On The “Quadriga””