It has been one month since Greek capital controls were imposed, and as we explained earlier, Greece is nowhere closer to having its deposit limits lifted. In fact, with several more months of capital controls at least, the Greek banks are likely to suffer ongoing balance sheet impairments which will ultimately result in depositor bail-ins, with Germany already pushing for haircuts on deposits over €100,000.

However, when it comes to banks there is at least still the illusion that Greece has some residual sovereignty. The reality is that it does not, as Greece is no longer an independent nation, and as of July 15, the Greek “In Dependence” day, every Greek decision needs to get pre-approval from both the ECB, Brussels and, naturally, Berlin.

This was made very clear earlier today when Reuters reported that the Greek stock exchange will remain closed on Monday but might reopen on Tuesday after a one-month shutdown which started on June 29. “It’s certain that it will not open on Monday, maybe on Tuesday,” a spokesperson for the Athens Stock Exchange told Reuters on condition of anonymity.

A spokesman for the Athens Stock Exchange said on Friday a proposal to reopen the bourse had been submitted to the European Central Bank for an opinion before a decision on the matter is made by the Greek finance ministry.

Another person with direct knowledge of the matter confirmed that Greek authorities aimed to reopen the bourse on Tuesday.

However, to understand what really happened, one should read the Bloomberg explanation, according to which it was the ECB which rejected proposals by Greek authorities to reopen country’s financial markets with no restrictions in place for both Greek and foreign traders, citing an Athens Exchange spokeswoman.

Ministerial decree is now expected, setting some restrictions in use of money from Greek bank accounts for trading.

And just like that, we wave goodbye to the Hellenic Republic, and greet the Mediterranean Vassal Province of Mario and Merkel. Because as of this moment, no Greek decision can be taken without the direct or indirect express prior approval of either the ECB and/or Berlin.

Oh, and incidentally, Greece may be better off leaving its markets closed indefinitely because since the day Greece was “fixed”, the GREK ETF, which has been the only equity way to trade Greece, has sunk 15%. 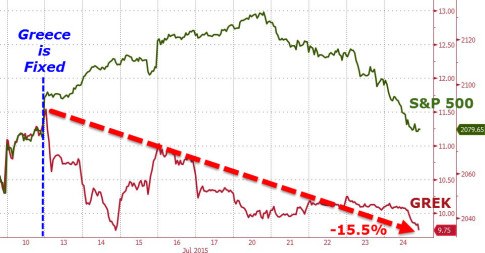 It has also managed to drag down the S&P 500 with it despite the Greek can having supposedly been kicked for at least a few more months.

And once the locals can finally cash out of the local banks which as we explained are an assured “doughnut” for existing equity investors pending either bankruptcy or massive dilution which will wipe out all existing stakeholders (the fate of depositors depends on whether a €25 billion source of liquidity can be found in very short notice) they will, which in turn will lead to another market closure for Greek stocks, only this time it will most likely be permanent.