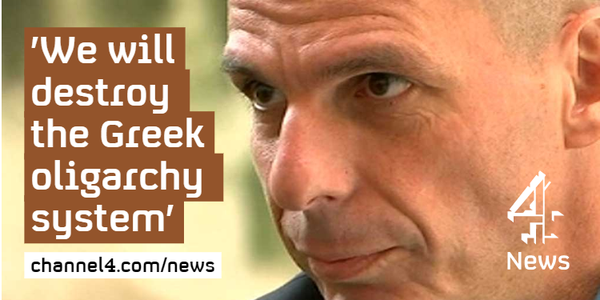 Let’s take a look where his wife, Danae Stratou, is coming from:

“Stratou was born to an elite family in Athens, Greece, in 1964. She graduated from London’s St. Martins College of Art and Design and evolved into a remarkable artist. However, even if she is the girl that wanted to live like common people and did so, Greece’s society would not allow her to be seen as a commoner because of her family name. This is why she probably left the country at an early stage of her life.

The artist is related — on her father’s side– to the Stratos family, who founded the Piraiki Patraiki textile industry in the Peloponnese, the largest textile company in Greek history.

Her mother is Eleni Potaga-Stratou, a legend in modern Greek art, whose projects are hosted in galleries and venues in Greece and abroad.” 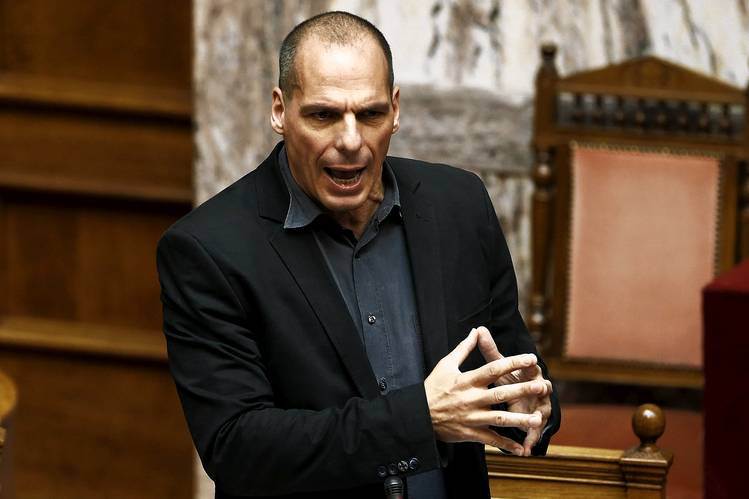 n an rare convergence of Greek and German viewpoints, overnight former Greek finance minister Yanis Varoufakis told the BBC that “economic reforms imposed on his country by creditors are “going to fail”, ahead of talks on a huge bailout. At the same time, Germany’s most noted Eurosceptic, Hans-Werner Sinn, in an interview with the newspaper “Passauer Neue Presse” also earlier today warned that any new aid would be “totally worthless” and “would never come back.”

In what was practically a race who can find harsher terms to describe the Greek bailout, Varoufakis said that Greece was subject to a programme that will “go down in history as the greatest disaster of macroeconomic management ever”.

As reported yesterday, the German parliament approved the opening of negotiations of Greece’s third €86 billion bailout when it rushed to vote through a bridge loan to Greece so the insolvent nation had some funds to repay the ECB’s Monday debt maturity, as well as repay the roughly €2 billion for Greece is in default to the IMF. Of note was the jump in German MPs who voted “no” to 119 from just 32 in the February vote to extend the Greek bailout.

In a damning assessment, Varoufakis told the BBC’s Mark Lobel: “This programme is going to fail whoever undertakes its implementation.”

Asked how long that would take, he replied: “It has failed already.”

He also said Greek Prime Minister Alexis Tsipras, who has admitted that he does not believe in the bailout, had little option but to sign. “We were given a choice between being executed and capitulating. And he decided that capitulation was the ultimate strategy.”

Which also happens to be Varoufakis’ biggest failure: his strategy was accurate and his math was correct that to Europe a Grexit would be far more expensive than keeping Greece in the Euro, however Europe was just as accurate in realizing Greece has no Plan B for its banking system as Greece had never prepared either a plan for a parallel currency nor how to obtain Debtor in Possession funding, which is what a bankrupt Greece would need – ostensibly either from China or Russia – to fund it in the interim period in which it was ending its tumultuous relationship with Europe.

Understandably Greece did not want to push the Grexit line too hard for obvious reasons – it was all part of the “blame game” – however now that Germany itself has opened a Pandora’s box it can’t close ever again when it brought up the possibility of a temporary Grexit, Greece should most certainly prepare for the worst case the next time it has to rerun the entire bailout tragedy in 6-9 months, or perhaps sooner.

However, none of this will be Varoufakis’ problem any more – instead we hope his successor learns from Yanis’ mistakes. And speaking of his successors, late yesterday Tsipras has announced a cabinet reshuffle, sacking several ministers who voted against the reforms in parliament this week. But he opted not to bring in technocrats or opposition politicians as replacements.

As a result, it now seems that Tsipras will preside over ministers who, like himself, harbor serious doubts about the reform program. Which is why we truly hope they are prepared to implement the missing Plan B when the time comes next.

Finally, in what is perhaps the best anecdote about Greece right now, AFP reported that “embattled Greek Prime Minister Alexis Tsipras eats and sleeps poorly and rarely manages to see his family, his mother told a tabloid on Saturday.”

“Alexis lately does not eat, does not sleep, but he has no choice — he has a debt to the people who put their faith in him,” Aristi Tsipras, 73, told Parapolitika weekly.

“I rarely see him any more. He goes from the airport straight to parliament. He has no time to see his children, how can he see me?” Aristi Tsipras said.

“When we speak, I tell him to do the best for the country and take care of himself. He tells me not to worry, and that everything will be fine,” she said.

Unfortunately it won’t be, however that will only be revealed when not only the PM can “no longer eat or sleep”, but the entire country of Greece, too. 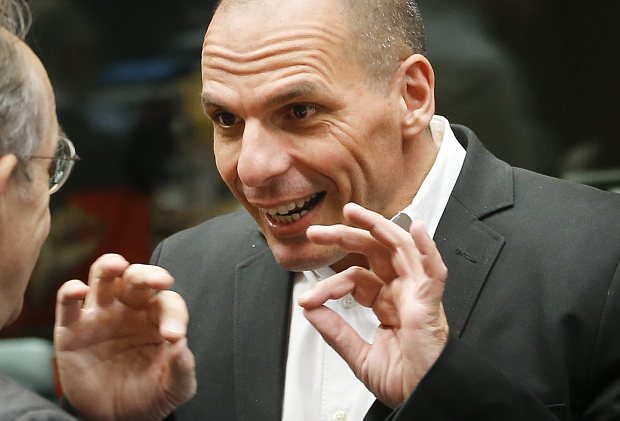