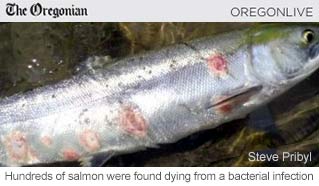 KTVZ, Jul 16, 2015 (emphasis added): Restricting fishing in Oregon streams and rivers for the first time ever… Oregon Department of Fish & Wildlife announced it’s taking drastic measures… they’ve never had to do this before… ODFW: “We’re starting to see fish kills in more places than we typically do. This is a pretty extreme set of conditions.”

Statesman Journal, Jul 16, 2015: [ODFW is taking] an unprecedented step… The move comes on the heels of multiple fish die-offs… “We’ve never had to do anything like this before — we’re in new territory,” said [ODFW’s] Bruce McIntosh.

The Oregonian, Jul 10, 2015: Scores of dead salmon are washing ashore… mortality rates are rapidly rising for juvenile fish near John Day Dam… [French] said it appears the fish are dying from a bacterial infection… “It’s very alarming that we’re seeing them this early,” he said… [Paul Wagner, NOAA fisheries biologist] called it a head scratcher. The die-offs seem to be associated with disease, he said.

Siskiyou Daily (Calif.), May 19, 2015: Klamath Fish Health Assessment Team has raised its level of alert… due to an increased detection of a deadly disease…. Chinook salmon tested in two reaches of the Klamath River… reached a 100-percent prevalence of infection [for] one of the deadliest salmon diseases…  [Juveniles] have been found with… distended bellies, pale-colored gill and gill erosion… [N]ear the Scott and Klamath rivers confluence… 86 out of 120 showing distended bellies and 87 out of 114 showing pale gills…

OPB, Jun 9, 2015: More than half of the 3-inch long Chinook in the [Klamath River] trap are either dead or showing signs of a serious parasitic infection… nearly 100 percent of Chinook caught in this fish trap in early May were infected.

KATU (Portland), Jul 10, 2015: Salmon and trout, even sturgeon, are dying like never before… on the Deschutes, Santiam, Mackenzie, Clackamas, and other rivers.

KGW (Portland), Jul 7, 2015: It just seems like it’s getting worse… the issue certainly hasn’t improved since we reported on it 2 weeks ago… Chinook salmon, even some  sturgeon, continue to wash up… Several fishermen I spoke with down here today, well they’re worried… Pretty much everywhere you look… dead fish… Starting last month, Chinook salmon began washing up… far short of their spawning grounds… It’s all the talk among local fisherman, “I’ve lived here about 25 years, and I’m an avid fishermen. I’ve never seen any fish like this on the bank as much as I’ve seen this year.”

KOIN (Portland), Jun 19, 2015: Is this a really big concern right now? Very much so… “I’ve never seen it like that before“… The Chinook are on their way back from the ocean… Fishermen are coming up empty and are worried.

KGW, Jun 22, 2015: A startling site… Chinook salmon dying in the rivers… Biologists counted more than 100 on just a 3 mile stretch… We came down here this morning expecting to find 1, maybe 2, dead Chinook salmon. Boy, were we wrong — you can find them about every 20 yards… one after another… Have you ever seen that before? “Never, ever, ever, ever.” Jeannie Brooks has been fishing [here] with her dad for decades, never before had she seen this… “I looked all the way down and thought, what are all these dead fish doing here?”

KGW, Jul 9, 2015: [A diver] told us what he’s been seeing under the surface… there are salmon sitting dead in spots on the Clakamas River bottom… littered here and there.