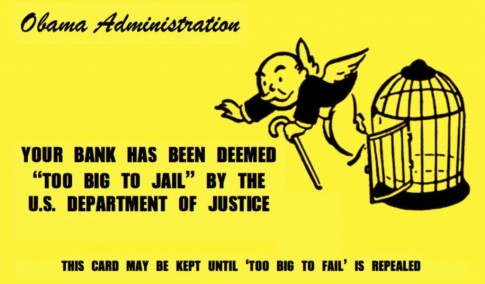 Three top Democrats are accusing the Department of Housing and Urban Development of quietly removing a key clause in its requirements for taxpayer-guaranteed mortgage insurance in order to spare two banks recently convicted of federal crimes from being frozen out of the lucrative market.HUD’s action is the latest in a series of steps by federal agencies to eliminate real-world consequences for serial financial felons, even as the Obama administration has touted its efforts to hold banks accountable.

Two days ago, I highlighted a feel-good story about how officials in Santa Cruz County decided to take mega bank criminality into their own hands by voting to cease business relationships with five criminal TBTF mega banks. Here’s an excerpt from the post, Santa Cruz County Votes to Cease Doing Business with Five TBTF Mega Banks:

“There seems to be no limit to the greed in some our nation’s largest banks. I believe it is critical that the County only work with the most trustworthy institutions as we invest and protect the public’s tax dollars. Santa Cruz County should not be involved with those who rigged the world’s biggest financial markets.

The board, acting on a request (pdf) from Supervisor Ryan Coonerty, voted to “not do new business for a period of five years with Citigroup, JP Morgan Chase, Barclays, Royal Bank of Scotland and UBS as specified, and further direct that the County unwind existing relationships with these five banks to the greatest extent feasible.”

Unsurprisingly, the federal government, under bank coddler extraordinaire, Barrack Obama, has decided to take a different tact. When “guilty pleas” threatened to exclude JP Morgan and Citibank from making certain FHA–insured loans, the Department of Housing and Urban Development (HUD) immediately came to the rescue and changed its own documents without telling anyone and without allowing for public commentary.

David Dayen at the Intercept did an excellent job covering this developing story:

Three top Democrats are accusing the Department of Housing and Urban Development of quietly removing a key clause in its requirements for taxpayer-guaranteed mortgage insurance in order to spare two banks recently convicted of federal crimes from being frozen out of the lucrative market.

HUD’s action is the latest in a series of steps by federal agencies to eliminate real-world consequences for serial financial felons, even as the Obama administration has touted its efforts to hold banks accountable.

Sens. Sherrod Brown and Elizabeth Warren and Rep. Maxine Waters fired off a letter to HUD on Tuesday, saying they believe that the timing of the change was designed to clear the way for two banks recently convicted of federal crimes — JPMorgan Chase and Citigroup — to continue to make Federal Housing Administration-insured loans. Last year, JPMorgan Chase wrote $1.67 billion in FHA loans, and Citi wrote $342 million, according to data from the Congressional Research Service.

On May 20 of this year, JPMorgan Chase and Citigroup both entered a guilty plea on one felony count of conspiring to rig foreign currency exchange trades, the largest market on the globe.

On the current HUD-92900-A form, lenders must certify that their firm and its principals “have not, within a three-year period … been convicted of or had a civil judgment rendered against them” for a variety of crimes, including “commission of fraud … violation of Federal or State antitrust statutes or commission of embezzlement, theft, forgery, bribery, falsification or destruction of records, making false statements or receiving stolen property.”

JPMorgan and Citi’s guilty plea would fall under the antitrust statute, and according to Brown, Warren and Waters’ reading of the certification, that would make them ineligible to obtain FHA insurance on their loans.

On the updated form, this language has been excised. The notice in the Federal Register did not even mention the removal, making it impossible to discover without comparing the old form and the proposed form side by side. The Wall Street Journal ran a story about the certification changes in May, but failed to notice that the new language would let law-breaking banks off scot-free.

The day before HUD released the notice in the Federal Register, the New York Times reported that the Justice Department sought to lessen the consequences of the guilty pleas in the foreign exchange rigging case, ensuring that federal regulators would not use the pleas to bar banks from certain business lines.

The “Justice Department” has merely become an Orwellian joke at this point. There is absolutely zero justice being distributed, and its primary function appears to be the defense of cronyism.

As someone who has been studying the U.S. economic and political situation 24/7 for over five years now, I can tell you that without question, the single greatest threat to liberty, free markets and prosperity in America today relates to the criminal, parasitic and unaccountable financial system’s cozy relationship to the U.S. government in Washington D.C.

Until this unholy alliance is shattered to pieces, there cannot and will not be any real change in these United States. As such, any “anti-establishment” candidate who fails to make this their number one issue (i.e., Trump), is nothing more than a phony, fraud demagogue.

It’s not even “Too Big to Jail” any longer. It’s now, “Too Big to Lose Profits.” After all #banklivesmatter

Why Obama Allowed Bailouts Without Indictments by Janet Tavakoli