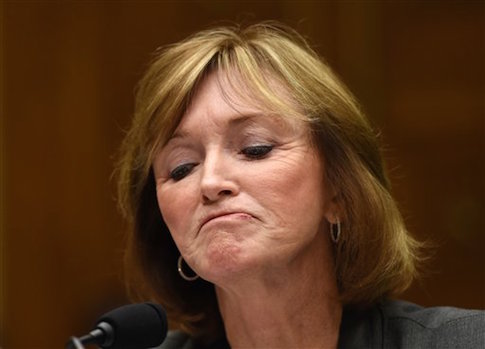 If there was any doubt just who Obamacare was created to serve from day one (spoiler alert: it was never America’s population), we now have the answer and it is so simple, even a 5-year-old can get it. Moments ago Politico reported that former Medicare chief Marilyn Tavenner, and the infamous former administrator of the Centers for Medicare and Medicaid Services who was responsible for writing many of Obamacare’s rules and regulations for the insurance industry, only to be fired following the disastrous rollout of the HealthCare.gov enrollment website, has been hired as the new CEO of America’s Health Insurance Plans, the “powerful K Street lobbying group.”

Cited by Politico, AHIP board chairman Mark Ganz in a statement that”There is no better individual than Marilyn to lead our industry through the increasingly complex health care transformation that is underway. She has the respect and trust of policymakers and stakeholders from all sides, and a personal commitment to advance meaningful solutions for improving access to quality, affordable care for all Americans.”

Well, maybe for some Americans: those who are shareholder or employees of US health insurance companies, which as it now emerges, are the biggest benefactors of Obamacare because from the very beginning, they had their own operative setting up the rules and regulations of the biggest US healthcare overhaul in history to benefit, drum roll, them.

And now the same insurance companies, just to benefit some more, are poised or already in process of hiking insurance premiums across America and crush the spending power of ordinary Americans, those who were supposed to benefit from Obama’s socialized healthcare dream.

The Affordable Care Act has been a mixed bag financially for insurers, said Robert Laszewski, an industry consultant. The expansion of Medicaid and the continued growth of private Medicare plans have been a boon for insurers, he noted. But the law’s new health insurance exchanges have been more troublesome for health plans, many of which are seeking greater rate hikes in 2016.

“They’re getting creamed,” Laszewski said of plans in the exchange business. “Any time you see a rate increase above 7, 8, 9 percent, they’re losing money.”

Actually, that’s bullshit: any time you see a 9% increase (or much more), it means there is cartel pricing in action, and thanks to the Supreme Court’s ruling supporting Obamacare, healthcare is now a tax on Americans and one has no choice but to pay whatever premium incueases are imposed on them.

It gets even more comical:

Tavenner can push the group’s agenda in Congress, but she will face a ban on direct communications with the agency that she oversaw. That restriction shouldn’t present too much of a hurdle to being an effective advocate for the industry, said Meredith McGehee, policy director for the Campaign Legal Center.

It won’t be a hurdle, but in the meantime, Tavenner will be paid about 20 to 30 times more than when we was a mere government lackey (and quite incompetent considering the billions spent to rollout a broken healthcare.gov) available for hire to the highest bidder, unprecedented conflicts of interest notwithstanding.

And just to show how extensive the revolving door is, Tavenner is replacing AHIP’s longtime head Karen Ignagni, who left the group to run EmblemHealth, a big New York insurer. Her departure was soon followed the announcement that UnitedHealth Group, the country’s largest insurer, would leave AHIP.

So for any 5 year old who are still confused: the insurance industry wrote the rules of Obamacare, and is now set to profit from it, which incidentally was obvious to anyone who has been following the stock prices of publicly traded insurance companies, which if the recent merger mania is any indication will shortly roll up into one monopoly enterprise, thus concluding Obama’s dream of a single-payer health system.