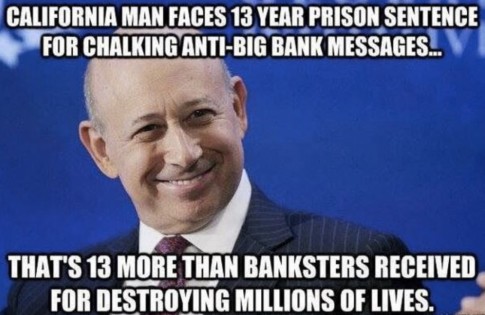 This story demonstrates how completely and totally broken the U.S. justice system is. Should this couple have been having sex in public and in broad daylight? Absolutely not. Should there be some sort of punishment? Absolutely.

That said, the punishment should fit the crime in a just civilization, and 15 years behind bars for public sex is more akin to what you’d expect in Saudi Arabia. It’s particularly appalling when compared with the license to commit fraud and steal, which politically connected oligarchs have been granted. After all, who was really harmed by this couple’s act? Sure, some tourists may have had their day temporarily ruined or inconvenienced. A three-year-old girl may have seen something, but would probably have no way of understanding what it was. On the other hand, criminal bankers have demonstrably ruined the lives of hundreds or millions, if not billions, of people across the globe. Yet not a single TBTF executive has been prosecuted. They were bailed out instead.

Meanwhile, what about the pastor who faces only four months for molesting a little girl. Yes, you read that right. Our society is so completely fucked up, that two people irresponsibly making love in public will have their lives ruined, while a religious authority caught molesting a little girl receives a slap on the wrist.

Well the sentence has now been handed down, and while it was far less than 15 years, 2.5 years in jail for his action still seems extreme. From ABC:

A man convicted of having sex on a Florida beach in front of families was sentenced to two and a half years in prison on Monday.

Jose Caballero, 40, and Elissa Alvarez, 21, were convicted in May of two counts of lewd and lascivious behavior in a case that drew international attention for the couple’s brazen act. They were videotaped having sex on a Manatee County beach last summer in broad daylight. Witnesses testified that a 3-year-old girl saw them.

Prosecutors say they were tougher on Caballero because he previously served eight years for cocaine trafficking. Both must now register as sex offenders. The Bradenton Herald reports the jury found them guilty after deliberating only 15 minutes. The couple had faced 15 years in prison.

“If you think about 2:30 in the afternoon on a crowded beach. It takes a certain type of person to do that in front of children a few feet away,” said Assistant State Attorney Anthony Dafonseca.

I am not for a moment excusing Caballlero’s behavior. It was unacceptable and certainly deserves punishment, but in a world in which bankers who ruined tens of millions of lives got bailed out by taxpayers, this sentence is just another slap in the face to average citizens, and only serves to further convince people (rightly) that the rule of law in America is dead and buried.