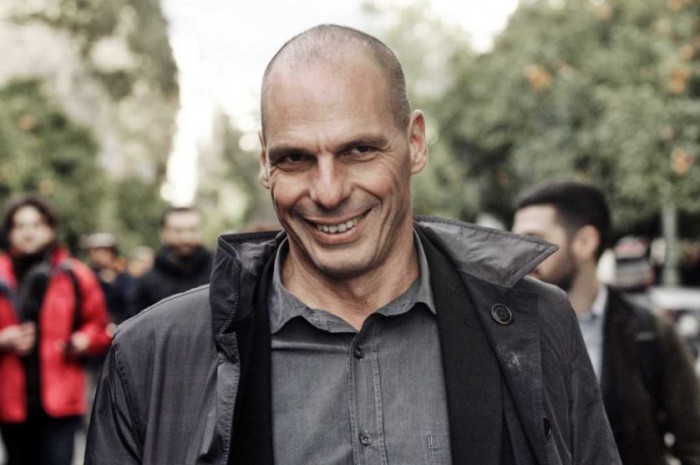 – What Stinks about Varoufakis and the Whole Greek Mess? (New Eastern Outlock, July 3, 2015):

Something stinks very bad about Greek Finance Minister Yanis Varoufakis and the entire Greek mess that has been playing out since the election victory of the nominally pro-Greek Syriza Party in January. I am coming to the reluctant conclusion that far from being the champion of the hapless Greek people, Varoufakis is part of a far larger and very dirty game.

The brilliant psychologist Eric Berne, author of the seminal book Games People Play, would likely call the game of Varoufakis and the Troika, “Rapo,” as in the rape of the Greek people and, ultimately of all the EU, Germany included. How do I come to this surprising conclusion?

When the left-right coalition was elected by a Greek population desperate for change from the several years of austerity, pension cuts, health and education cuts demanded by the IMF in order to insure that Greek creditors be repaid their pound of flesh in terms of state debt, I was among many who held out hope that finally a government that stood for the interests of her people was in office in Athens.

What we have witnessed since is what can only be called a clown show, one in which the laugh is on the Greek people and EU citizens as a whole. The ones laughing, as often is so, are the mega banks and Troika–ECB, IMF and EU. Behind the Troika, almost invisible, are the Greek oligarchs who have robbed the state coffers of hundreds of billions over the years, tucking it away in numbered Swiss and Lichtenstein secret bank accounts, avoiding paying a single penny tax to support their nation. And it is looking more and more as though the “leftist” economist, Varoufakis’s role is that of a Trojan Horse for the destruction of the entire Eurozone by the bankers and those Greek oligarchs. Next after Greece Italy looks poised to become victim, and that will put the entire Euro in a crisis that is today unimaginable.

A man is known by the company he keeps, so goes the adage. By this measure Yanis Varoufakis keeps very bad company for a finance minister who claims to be defending the living standards of his people. Before becoming Greek Finance Minister in the January coalition government of Alexis Tsipras, Varoufakis spent time in the United States working for the Bellevue Washington video game company, Valve Corporation, whose founders came from Bill Gates’ Microsoft. In the late 1980’s he studied economics and game theory in the UK at University of Essex and East Anglia and taught at Cambridge. Then he spent the next eleven years in Australia teaching and even taking Australian citizenship.

As an Australian citizen Varoufakis returned in 2000 to teach at the University of Athens. Then from January 2013 until his appointment as Finance Minister of Greece, Varoufakis taught at the University of Texas where he became close with James K. Galbraith, son of deceased Harvard economist, John Kenneth Galbraith, also with the Washington establishment think-tank, Brookings Institution. In short Varoufakis is an Australian citizen who has spent most of the past three decades in Britain, USA and Australia and little of that in his native Greece.

That of course per se does not disqualify him at all from being an honest and effective finance minister of his native Greece. But to date he has done more to increase the misery of the Greek people in six short months than almost anyone else, even Wolfgang Schäuble or the IMF’s Christine Lagarde.

He pretends to be against austerity but his record shows the opposite. Varoufakis was the adviser to Prime Minister George Papandreou and PASOK when Papandreou made the disastrous draconian austerity deal with the EU on behalf of Greece so that French and German banks could be bailed out. Varoufakis also has at various times heaped praise on Mario Draghi and the ECB, suggesting solutions for how to keep Greece in the EU, a track that pre-programs Greece for self-destruction under the current Troika regime of austerity.

In Varoufakis’ book on the EU financial crisis titled “A Modest Proposal,” he invited former French Prime Minister Michael Rocard to write the forward. Rocard has called for the EU to appoint a European “strongman”–read dictator–and Rocard’s choice is European Parliament president Martin Schulz, the very same man who warned the new SYRIZA government to abide by the austerity agreements concluded by the past PASOK and conservative governments. Varoufakis has repeatedly argued that Greece must “grin and bear” the measures imposed on it by the bankers and the German government as a member of the Eurozone. He has insisted that a Greek Euro exit is not going to take place.

With official Greek unemployment over 30% of the workforce and economic losses because of Troika-imposed budget austerity the government’s tax-revenue shortfall in January alone was 23% below its €4.5bn target for the month. The government in Athens has levied crippling taxes on the middle class and made sharp cuts to government salaries, pensions, and health-care coverage. While ordinary citizens suffer under the weight of austerity, now Banks are closed at least until the July 5 referendum on more austerity. Greece is a human catastrophe.

Were Varoufakis the man he pretends to be before his Greek countrymen, he would have set forth a strategy of Greek exit from the Euro and a strategy akin to that of Iceland to declare a debt moratorium, freeze all debt repayments to the Troika–IMF, ECB and EU. Then he would put Greece on a national currency, impose capital controls and seek strong economic ties with Russia, China and the BRICS countries.

Indeed, when Greek Prime Minister Tsipras was in St. Petersburg in mid-June to meet with Russian President Putin, Putin extended a very generous offer of prepayment of $5 billion towards the Greek participation in the Turkish Stream Gazprom pipeline.

That would have given Greece breathing room to service debt repayments to the IMF. Brussels and Washington of course were not at all happy with that. Putin then offered Greece membership in the new BRICS development bank which would allow Greece to borrow to get out of the worst of the crisis without more savage austerity. That of course would bring Greece closer to Russia and also to China, something Washington and Brussels oppose with all their might. But rather than accept, Greece and Varoufakis walked away from a solution that would have avoided catastrophe as it is now unfolding.

At this point it indeed looks as if Varoufakis’ role has been to act as the Western bankers’ Trojan Horse inside the Greek government, to prepare Greece and the Greek people for the slaughter, all the while posing as the tire-less fighter for Greek interests, all without a neck tie, of course.

As the former US Assistant Treasury and critic of the US foreign economic policies of recent years, Paul Craig Roberts recently described it, “Greece’s creditors, the EU and the European Central Bank…are determined to establish the principle that they can over-lend to a country and force the country to pay by selling public assets and cutting pensions and social services of citizens. The creditor banks then profit by financing the privatization of public assets to favored customers.The agenda of the EU and the central bank is to terminate the fiscal independence of EU member states by turning tax and budget policy over to the EU itself.”

Roberts goes on to state that the Greek “sovereign debt crisis” is being used to create a precedent that will apply to every EU member government. The member states will cease to exist as sovereign states. Sovereignty will rest in the EU. The measures that Germany and France are supporting will in the end terminate their own sovereignty. “

How did Greece and the European Union’s Eurozone countries get in such a crisis? The energy that vibrates through all of Europe right now is not of love for fellow human beings, but of hate. There is hate from the Germans against what they are convinced are lazy and tax-cheating ordinary Greeks. They have been fed that image by controlled mainstream media itself in turn controlled by the American oligarchs and their think-tanks. There is hate from the EU Commission and the EU leadership against Greece for creating what they see as the existential crisis of the EU. There is hate from German Chancellor Merkel for ruining her legacy, perhaps.

Above all, there is hate towards the Greek people from their own Greek oligarchs. The Greek oligarchy—shipping magnates, oil refinery owners, telecoms owners, media magnates, billionaires many times over—since the early 1990s, has dominated Greek politics. Greeks call them “diaplekomenoi”–the entangled ones. These elites have preserved their positions through control of the media and through old-fashioned favoritism, buying politicians like Yanis Varoufakis.

The Greek oligarchs, with their untaxed billions hidden in foreign bank accounts, are willing to see their own nation destroyed to hold on to their billions. That’s real hate. Those oligarchs are deeply ashamed of being Greek. That shame likely goes way way back, perhaps some 700 years, to the defeat and subjugation of Greece by the Ottoman Empire beginning in the 1360s. Maybe it’s time to move on from such childish feelings of hate.

F. William Engdahl is strategic risk consultant and lecturer, he holds a degree in politics from Princeton University and is a best-selling author on oil and geopolitics, exclusively for the online magazine “New Eastern Outlook”.