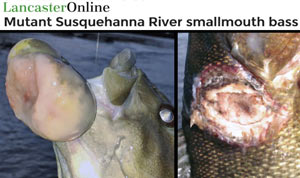 CNN, May 6, 2015 (emphasis added): A smallmouth bass that was pulled out of the Susquehanna River… had a large cancerous tumor protruding from its jaw… an unusual and worrisome development. “Cancerous growths and tumors on fish are extremely rare in Pennsylvania and throughout the U.S…” the commission said.

FOX 43, May 5, 2015: This is the only documented case of this type of tumor being found on small mouth bass in Pennsylvania… biologists continue to find sores and lesions on young-of-year bass during late spring and early summer surveys at alarming rates.

FOX 43, May 5, 2015: The commission says it’s rare but anglers aren’t surprised. Jacob Myers and his family have been fishing [here] for decades. He joked about the abnormalities in the fish he’s caught over the years. “You know, we’re just waiting to catch one with 3 eyes”… [The bass] may look surprising to some, to anglers, unfortunately, it’s normal.

York Dispatch, May 9, 2015: [Experts say] the fish with the large, grotesque tumor bubbling out of its face… was very rare, and could be just a genetic anomaly… In 2011, experts raised concerns about the appearance of intersex smallmouth bass in the river. Many of the male fish’s testicles were found to contain immature eggs as well as sperm. [A USGS scientist] said about two-thirds of the male smallmouth bass in the river were showing signs of this.

John Arway, Fish & Boat Commission Executive Director, Dec 2012: A high percentage of fish in the river have sex signs of both male and female. That’s not natural. We’ve got a lot of things that show there is something going on with the fish. We don’t really know what’s causing it… We’ve got some photos from anglers that show green and white spots, which we haven’t seen on any other fish in the state.

Geoffrey Smith, Fish & Boat Commission biologist (pdf), 2010: Further analysis of YOY [young of the year] smallmouth bass confirmed the presence of… pathogens. One of these is an unrecognizable pathogen… Adult male smallmouth bass were determined to have very high rates of intersex: a condition in which female egg cells are found in the testes of males… It appears that yet unmeasured variables may be acting on the smallmouth bass population.

Reading Eagle, Jan 30, 2013: A disease [is] devastating the bass fishery in the Susquehanna… comparable to an epidemic in humans. The issue is “very, very serious,” [Arway] said.

Though no media outlets mentioned the fish was caught near the Three Mile Island nuclear plant, CNN’s report included footage of the river with TMI’s cooling towers in the background.