1,000 Greek bank branches chanced a stampede in order to open their doors to the country’s retirees on Wednesday.

The scene was somewhat chaotic as pensioners formed long lines and the country’s elderly attempted to squeeze through the doors in order to access pension payments.

As Bloomberg reports, payouts were rationed and disbursals were limited according to last name. Here’s more:

It’s a day of fresh indignities for the people of Greece.

About a third of the nation’s depleted banks cracked open their doors after being closed for three days. But all they did was ration pension payments, hours after the country became the first advanced economy to miss a payment to the International Monetary Fund and its bailout program expired.

On the third day of capital controls, a few dozen pensioners lined up by 7 a.m. at a central Athens branch of the National Bank of Greece, an hour before opening time. They were to receive a maximum of 120 euros ($133), compared with the average monthly payment of about 600 euros. Many left with nothing after the manager said only those with last names starting with the letters A through K would get paid.

“Not only will I have to queue for hours at the bank in the hope of getting 120 euros, but I’ll have a two-hour round trip,” said Dimitris Danaos, 77, a retired local government worker who was making the bus journey from his home outside the Greek capital to the suburb of Glyfada.

In chaotic scenes, thousands of angry elderly Greeks on Wednesday besieged the nation’s crisis-hit banks, which have reopened to allow them to withdraw vital cash from their state pensions.

“Let them go to hell!” said one pensioner waiting to get his money, after failed talks between Athens and international creditors sparked a week-long banking shutdown.

The Greek government, which closed the banks and imposed strict capital controls after cash machines ran dry, has temporarily reopened almost 1,000 branches to allow pensioners without cards to withdraw 120 euros ($133) to last the rest of the week.

The move has again sparked lengthy queues at banks across Greece — and outrage from many retirees who are regarded as among the most vulnerable in society, exposed to a vicious and lengthy economic downturn.

Under banking restrictions imposed all week, ordinary Greeks can withdraw up to 60 euros a day for each credit or debit card — but many of the elderly population do not have cards.

Another customer, a retired mariner who asked not to be named, told AFP he had no cash to buy crucial medicine for his sick wife.

“I took out 120 euros — but I have no money for medication for my wife, who had an operation and is ill,” he added. 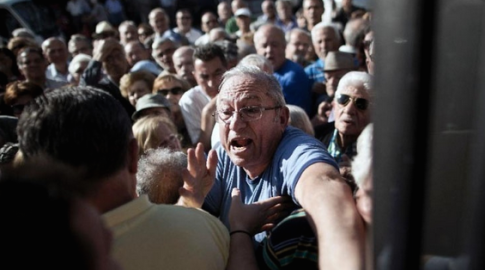 Here’s a look at the scene at National Bank in Athens courtesy of The Telegraph:

As we outlined in detail earlier this morning, the latest polls show a slim majority of Greeks plan to vote “no” in the upcoming referendum (which, as far as we know, will still go on). Many analysts and commentators say a “oxi” vote would likely lead to a euro exit and with it, far more pain for the country’s retirees.

Indeed, as we noted on Tuesday in “For Greeks, The Nightmare Is Just Beginning: Here Come The Depositor Haircuts,” Goldman has suggested that only once Syriza’s “core constituency of pensioners and public sector employees” sees the cash reserves (to which they have heretofore enjoyed first claim on) run dry, will they “face the direct implications of the liquidity squeeze the political impasse between Greece and its creditors has created. And only then will the alignment of domestic political interests within Greece change to allow a way forward.”

And so, as sad as it is, the scene that unfolded today in front of the roughly one-third of Greek bank branches which opened their doors to pensioners, may have been preordained by the powers that be in Burssels because as we said yesterday evening, breaking Syriza’s voter base may have been necessary in order for the Troika to finally force Tsipras to relent or else risk being driven from office, after capital controls and depositor haircuts force public sector employees to collectively cry “Uncle”, beg Europe to take it back, and present Merkel with Tsipras and Varoufakis’ heads on a proverbial (and metaphorical, we hope) silver platter.