Just a week ago, we noted the hard-working US government was drawing up plans for “knife regulations.” Well, in The UK it appears to have already begun…

As SHTFPlan.com’s Mac Slavo warns, don’t try to think this one through – the logica fail and sheer volume of absurdity might just make you sick if you do… 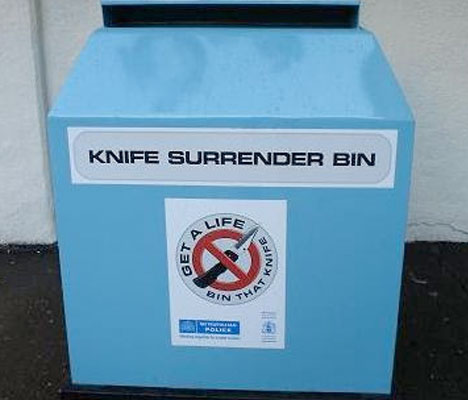 For the UK – whose laws and policies all-too-often influence those of the U.S. – gun control isn’t enough. Probably nothing will ever be enough.

Now a call to surrender knives, ongoing for years, is in full swing. Via Citizen Action:

The right to bear arms might be under attack here in America–but in the United Kingdom, police are trying to do something even more ridiculous: they’re attempting to ban knives.

The British police have recently joined forces with liberal grassroots activists in the UK, launching the “Save a Life–Surrender Your Knife” program. Knife crime has been climbing recently in major UK cities like London.

The program involved several weeks of “amnesty” for “pointed knives.” Civilians can turn in these apparently dangerous weapons at their local police station in exchange for “amnesty,” apparently, even though knives (rounded or pointed) aren’t illegal in the United Kingdom.

There is, however, a ban on people under 18 buying knives – going so far on the absurdity scale as to ban underage purchases of plastic knives! No joke. One woman in her 20s was even barred from buying spoons without proper ID: 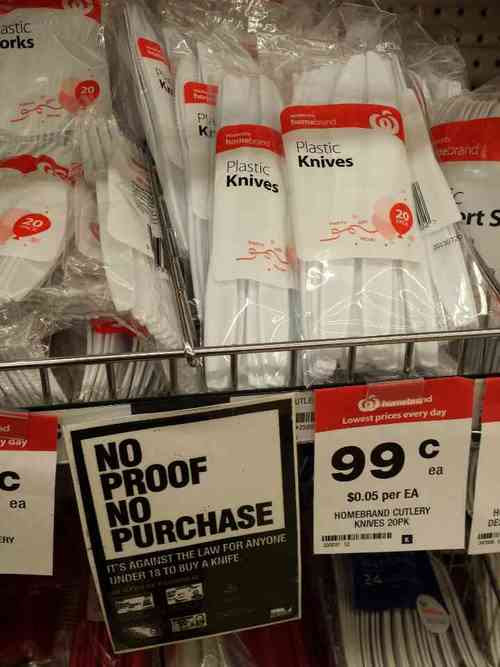 Since knives are used for food preparation and many other basic and essential activities, and virtually any crude material can be transformed into a knife, even police admit the “amnesty” for turning in knives will do nothing to stop knife crimes (but it will do a great deal for instilling a mentality of helplessness while heaping on more and more rules).

Because the problem with knife crime, however, is that it’s pretty much impossible to stop just by banning knives itself. Virtually every person in the United Kingdom owns a knife–and, as long as food needs cutting, that’s not going to change.

[…] the problem is that “many assaults are committed impulsively, prompted by alcohol and drugs, and a kitchen knife often makes an all too available weapon.”

Despite the attempt to paint knife crimes as an impulsive issue of short tempers and petty disputes, carjackings, robberies and premeditated murders are frequently committed with knives in the UK… and the system is trying to make sure victims remain defenseless.

Here is what the murder rate looks like since the UK’s gun ban – with knife murders spiking drastically: 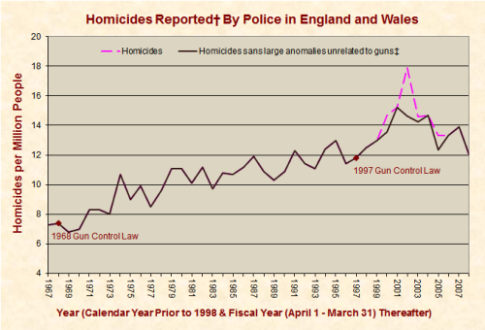 Police departments in the UK, urging people to give up their blades, including those from the kitchen, are literally advising people to NOT to become a victim by NOT defending themselves:

Don’t be a victim

If you feel you are in immediate danger from knife crime there are a number of steps you can take to protect yourself:
• Move away from the situation towards a public place (shop, house, restaurant etc.) as quickly as possible.
• Make as much noise as you can.
• Instead of carrying a knife, carry a personal alarm.
• Don’t fight back.

The same “logic” has of course been used in American debates on guns, with Homeland Security training even advising would-be victims at schools and offices to hide or throw cans of soup at active shooters.

It is a good enough assertion at this point to suppose that all the sharpest knives in the drawer have already been turned in or confiscated… as clearly no one in a position of authority has common sense or wits about them at all.

2 thoughts on “With Knife Murders Spiking After Gun Ban, UK Urges “Save A Life – Surrender Your Knife””