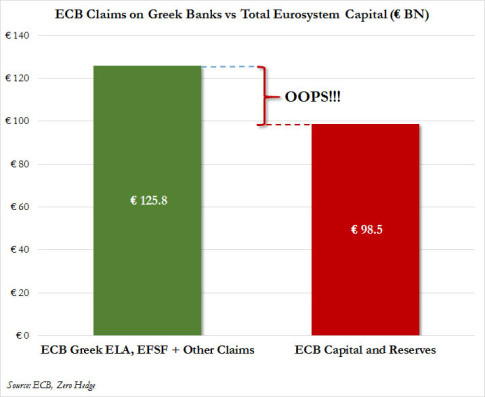 Last week we reported that as a result of the relentless surge in the Greek deposit flight, which may finally end tonight if, as now appears almost certain, the Greek government imposes capital controls, the ECB’s claims on the Greek banking system have now surpassed the total amount of Greek deposits… 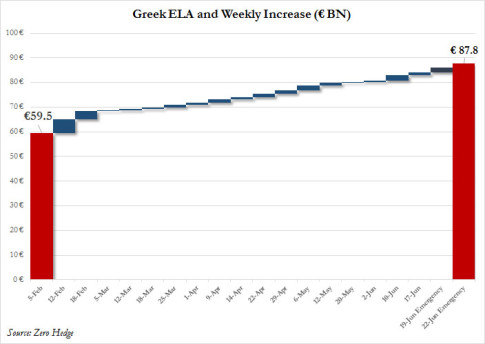 … when one factors in some €38 billion in collateralized EFSF bonds and other collateral usage. 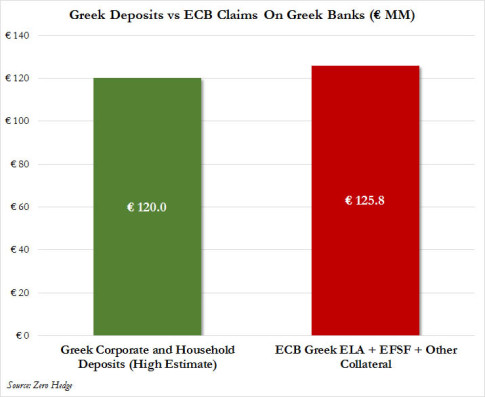 We previously explained that on the surface, this is terrible news for Greece as it implies that the moment the last linkage between the ECB and Greece is severed, Greek deposits will have to undergo a massive haircut as without ECB liquidity backstop funding the banks at ridiculously small haircuts on what is essentially worthless collateral, the Cyprus “Plan B” will be immediately imposed.

However, a quick glance at a different balance sheet reveals that a full-blown Grexit with all bridges burned between Greece and its former “irreversible monetary union” implies someone else may have an even greater headache on their hands. The balance sheet in question: that of the Eurosystem in general, and the ECB – which is the anchor behind the Eurosystem and the Eurozone’s official monetary authority – in particular.

The chart below compares total ECB claims to Greek banks (excluding SMP purchases of Greek bonds) side by side with the latest total Capital and Reserves of the Eurosystem as of June 19.

Incidentally the chart above is why earlier today Varoufakis said that “if ECB were to stop support for the Greek banking system would mean that Europe has failed.” Because if indeed the ECB were to pull the carpet from under Greece as it hinted it would do on Tuesday when the Greek program runs out, when it froze the Greek ELA despite the ongoing Greek bank run, it would promptly set off a chain of events that would not only crush the Greek banking system but destroy any credibility Greek sovereign collateral had as a state, impairing all Greek national and corporate collateral, including bonds and loans currently held by the ECB, to zero.

It would also mean that as that €126 billion or so of total ECB/Eurosystem claims on Greek banks were “charged off” in case of a terminal Greek “event” then the entire ECB capital buffer would also be wiped out, leaving the ECB with negative equity. Translated: dear Eurosystem members: we need more cash.

And yes, while in theory the ECB can always print more money (and it will, in fact as we first showed Goldman’s entire play has been that the ECB wants a Greek default precisely so it can boost its QE, and print stocks to new highs), an event such as this may well crush what little confidence the ECB has left: if not so much with Germany, whose commercial banks are well capitalized, but with the rest of the periphery, leading to a slow at first, then quite dramatic bank run across Italy, Spain, Portugal, Ireland and so on, in other words all those countries who have yet to address their €2 trillion bad debt problem, which the ECB eagerly brushes under the rug with every single stress test.

Finally, keep an eye on that old favorite, Europe’s TARGET2 balances: if indeed Greece is kicked out, watch as the imbalance promptly blows through all time high levels, and Germany is suddenly left on the hook for perpetuating an “irreversible” monetary system which just became very much reversible. 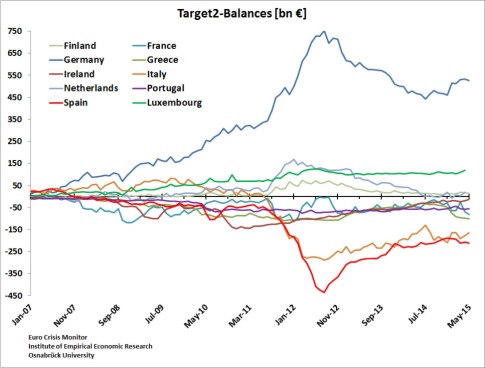