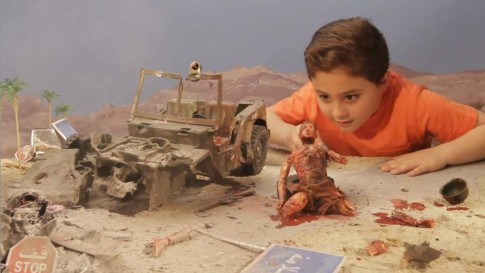 Daniel Campbell wakes up drenched in sweat. Every muscle in his body is tense. The dead child, the one he couldn’t save, is back. He creeps to the bathroom. The child is waiting for him. Its bloodied face stares at him accusingly from inside the mirror. He splashes cold water on his forehead and returns wearily to bed.

Daniel Campbell was a child soldier in the British Army. “I wanted to see the world and I wanted to help people,” he says, remembering the day he stepped, aged 16, into Portsmouth’s recruitment centre. And see the world he did: left with severe PTSD after tours in Iraq and Afghanistan, the Army abandoned him as if he were a broken toy.

The basic brutality that underpins the work of the British Armed Forces is not something that recruiters tend to dwell on when pitching to kids. So a group of former soldiers, Veterans For Peace UK, have taken it upon themselves to highlight the harsh realities of life and death in, and after, the army.