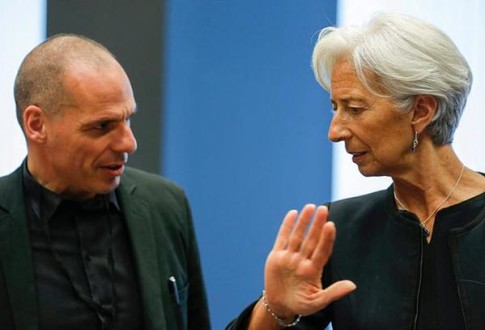 If there was any confusion if, as we warned first thing today was the biggest problem with the Greek referendum namely that next weekend there will no longer be a proposal to vote on, the IMF’s Christine Lagarde just put it to rest. As she told the BBC moments ago, the Greek government’s planned referendum on the terms of any new bailout plan will be invalid after Tuesday, when the current programme expires. As a result, the Greek people would be voting on proposals that were no longer in place.

But she said that if there was a resounding vote in favour of staying in the euro and restoring the economy then Greece’s creditors would be willing to try.

Speaking to the BBC’s Gavin Lee, she said there was still time for the Greek government to change its mind and accept the eurozone proposals.

Incidentally, in another interview with CNBC, Lagarde confirmed that hope is still an investment thesis: ” I certainly hope that the bundled payment due to the IMF on Tuesday night, at the latest, will be paid.”

Good luck, really. But assuming Greece, which hasn’t had any cash in over a month and has zero intention of paying the IMF its €1.5 billion, whe then?

” If they were not paid on Tuesday night, then there is a series of procedures and notifications that I have to initiate. But technically, any country that does not pay on due date is in payment arrears vis-à-vis the Fund. And the consequences are that the Fund cannot disburse vis-à-vis that country until the arrears has been paid. Greece remains a member of the IMF. Greece benefits and alternate seat on the Board… and has access to technical assistance, receives surveyance and services but it cannot receive any payment until arrears has been paid.'”

So it’s time to rephrase the referendum question which as was presented on the website of the Greek parliament is currently as follows:

Greek people are hereby asked to decide whether they accept a draft agreement document submitted by the European Commission, the European Central Bank and the International Monetary Fund, at the Eurogroup meeting held on June 25 and which consists of two documents:

We have no idea what a new referendum formulation may look like – most likely one on remaining in the Eurozone – but at that point the phrasing will likely be moot: by next Sunday, all else equal, the social situation in Greece is almost certain to devolve to the point where the government will hardly have much control left over key public works, especially if it has no money to pay wages and pensions, and the banking system implodes earlier in the week.

Ironically, the Greek PM, who clearly did not read the Goldman “conspiracy theory” article, which explained that Greece was set up as a fall guy, and a catalyst for the ECB to unleash even more “forceful” QE and thus to pad banker bonuses for 2015 with taxpayer moneyh, still is convinced that in the game theory between Greece and the Troika, rational minds are making the decisions:

Many are asking: what happens after the #referendum? With a clear “NO”, we will have a much stronger negotiating position. #Greece #vouli