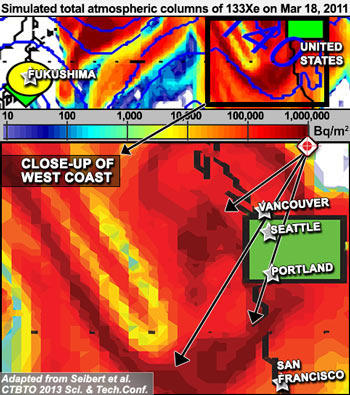 The Big Picture, Jun 24, 2015 — Kevin Kamps, Beyond Nuclear (emphasis added): “A recent revelation of Nuclear Regulatory Commission internal emails… reveal that there was concern at the highest levels of the U.S. government, and rightly so, about the radioactive iodine-131 escaping from Fukushima Dai-ichi… and reaching the United States… Rainwater at 242 times safe drinking water act permissible levels — so you better believe we got radioactive iodine-131 in the United States. Likely people ingested it — either breathed it in, or drank it in milk, or various other ingestion pathways. It attacks the thyroid gland… it does a tremendous amount of damage. And these emails… show that US government officials were worried about that, were calling for studies to be done to try to track the health damage. And what do you know, those studies did not happen… The monitoring and testing and the epidemiology were woefully inadequate to non-existent… The nuclear industry will try to bury the truth, and that sure happened after Fukushima… I think there’s been a huge dereliction of duty at the federal and the state levels.”

Kamps appears to be referencing an ENENews report from earlier this month, Censored US gov’t emails reveal proposed plan to test West Coast residents for Fukushima fallout — “Many cases of cancer may end up being attributed to exposures” — Doses could exceed emergency levels

The report quoted internal emails from March 2011 by the head of UC Berkeley’s nuclear engineering department, who wrote: “UCB faculty [is in] general agreement that prompt action should be taken… Many cases of thyroid cancer, and other health problems, may end up being attributed to exposures from the Fukushima accident… on the U.S. west coast… It is possible that we will find that some people have received doses of I-131 and other radionuclides that could exceed the levels [which] Protective Action Guidelines are designed to prevent. It could identify individuals who have had significant exposure… alert them and their medical care professionals to monitor for potential health effects.”

ABC (San Francisco KGO-TV), Mar 18, 2011: Nuclear engineers here at UC Berkeley say… don’t be alarmed. The tiny particles are just so small, they pose no threat at all… not harmful at all. One scientist here says you can get more radiation exposure on a flight… One model forecasts that the radiation plume… will reach California today… experts say this map is very misleading. First of all, there is no ‘plume’. Second of all, you cannot predict how the weather is going to carry radiation particles over here to the West Coast, if any at all.

The map above is a model developed by Japanese and European experts showing the strength and location of the Fukushima plume while over the West Coast on Mar. 18, 2011 — the same day as the broadcast of UC Berkeley’s claim that “there is no plume”. According to the map’s scale, dark red areas along the West Coast indicate the Fukushima fission product xenon-133 had a concentration in the air column of 1,000,000 becquerels per square meter.

Watch the interview with Kamps here